A few days ago my lovely black purse broke so I couldn’t close it anymore, so I went to Charming Charlies and found a wonderful replacement that looks like a more classy version of the one I had previously. 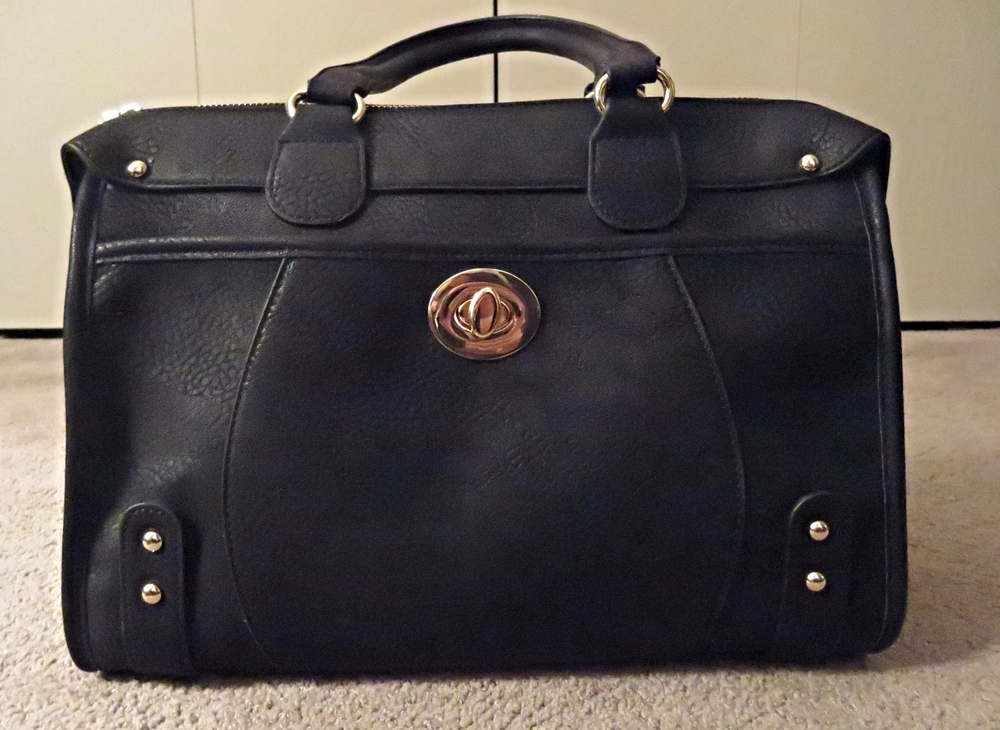 And it somehow is the same size but holds ten times more. Not that I needed more space in my purse. But I’m positive down the road, it’s going to get even more stuff in it that I don’t typically need on a daily basis. And normally there are a few receipts and random other items, but since I just switched purses I don’t have any of those items inside. 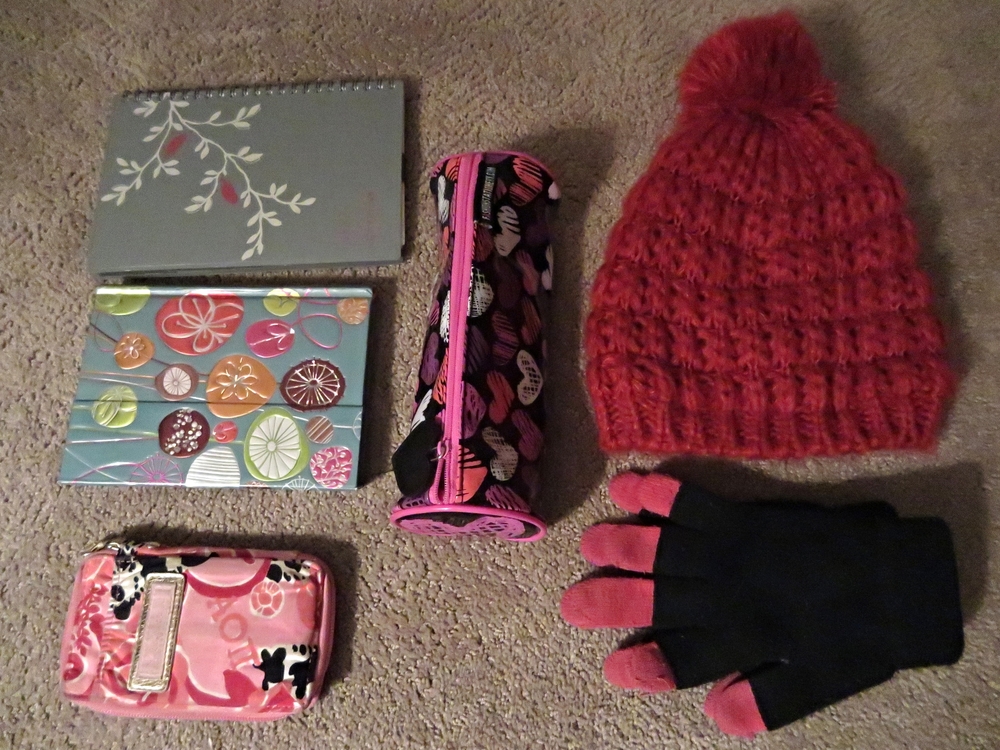 I always keep a journal or notebook in my bag so I can quickly write out lists or ideas that come into my mind. This journal was given to me as a present by one of my friends.

This is a Lilly Pulitzer wallet with my sorority’s design that she created. I have had this wallet for several years and holds every card that I have for various shops and places. Since membership cards are given out like candy and they all end up in the same spot.

As I’m somehow always losing pens or gaining a bunch that I never know where I got them from. I store all my pens, markers, and pencils in this white, pink, and purple heart pencil case that I got at Target during their back to school season. Now pens are disappearing for months in my purse, but I’m still mysteriously gaining pens.

Minnesota is often freezing cold during the winter, so I always leave the set in my bag so that way I’m never panicking over not having them if something happens where I’m stuck outside for long periods of time. My current hat is a red with a fuzzy bauble and for gloves they are black with pink finger tips. I used to have fun gloves that were pandas but they broke… so black and pink gloves it is.

Used to keep track of all my appointments that I tend to forget about even when I have them on both of my cell phones. This one is a lovely gray calendar with red – pink birds. 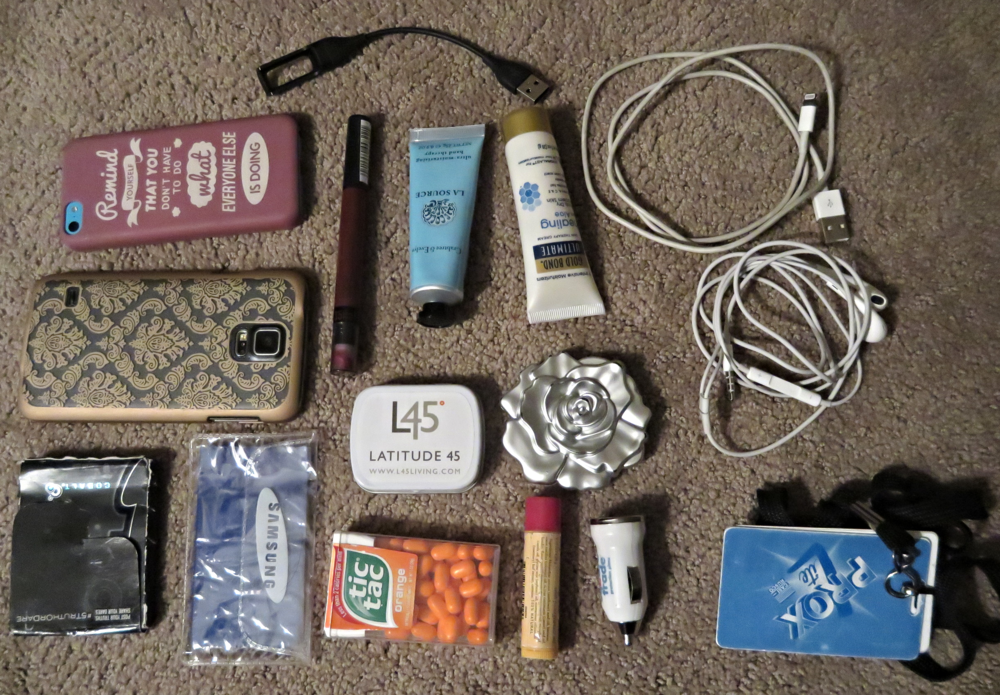 Because who wants dry hands or skin in the middle of winter. To combat winter’s harsh effect on my skin I use either one of these lotions: Crabtree & Evelyn La Source Ultra-Moisturizing Hand Therapy Lotion or Gold Bond Ultimate Skin Therapy Cream with Aloe.

Because touching up makeup or lipstick is not something you should do blindly. That and adjusting your contacts when they randomly decide to bug you during the day.

With winter comes the chapped lips and the best lip balm I’ve found to combat that is Burt’s Bees. It’s super soft, effective and easy to take with you.

Maybelline ColorBlur in No. 35 Plum

My favorite go-to lip stain that last all day. As I sometimes forget to put some color on my lips before I leave the house or just want to make my look more bold in the middle of the day.

Mints, Tic Tacs, and 5 Gum in the flavor Cobalt

Because who doesn’t want nice breath. Plus people are generally happy if they get to have a choice between the three.

I also typically have hairbands, bobby pins, and random other jewelry hiding in my purse for any situation where I just want to mix it up. Or having a hair disaster/emergency.

Yes I have two phones. One is for work and the other is for personal stuff. I love the phone case on each of these phones. The one on the iPhone 5c is by PointlessBlog, and the other is a damask pattern one I got off Amazon.

Used to get into my office at work. Sometimes you will also find my keys attached to these but typically not. During the day, if I’m at work, they are with the valet service in my parking garage. Or they’re in my coat pocket. One of the two.

I typically have between three to four chargers with me. One for my Apple iPhone, one for my Samsung Galaxy S5, one for my fitbit, and one universal car adapter charger. So no device is dying wherever I go. Unless I forget about it and can’t find a place to plug the chargers in.

Sometimes I have sunglasses or my regular glasses in here. During the winter I typically don’t. I was wearing my glasses when I took the photograph so they’re not depicted. But if I’m wearing contacts, then my glasses are in my purse. Along side of those I have a set of microfiber wipes so I can clean my glasses throughout the day when they get smudged.

What are some of your bag or winter necessities?