What is bipolar disorder?

Before I tell my personal experience with the disorder, I feel I need to explain what the mental disorder is.

Disclaimer: I am not a medical professional on this subject matter. I only have personal experience with the disorder and want to share it. If you feel any of these things relate to you, please consult a professional.

Also known as manic depression, is a common thing many people in the United States deal with daily. How many to be exact? 3 Million cases per year according to Mayo Clinic. This mental disorder is characterized by extreme mood swings where individuals experience depression and mania. Cycles between the two can be a few times every year to several in weeks.

There are a few different types of Bipolar Disorder. They are not varying degrees of severity but separate diagnoses. Below are the criteria for each type of Bipolar Disorder according to the Diagnostic and Statistical Manual of Mental Disorders (DSM-5), which is written by the American Psychiatric Association:

Here’s another way of looking at it through a graph. 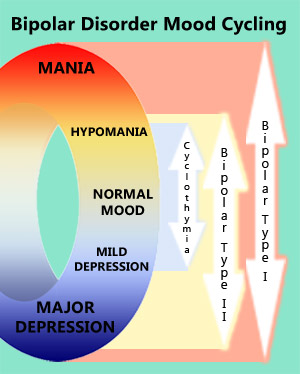 Now what’s the difference? Hypomanic and manic episodes sound almost identical. Well they are similar as they share many of the same symptoms but with different criteria. Manic episode lasts over a week and hypomanic episodes lasts four days. Manic episodes also disrupt daily life, while a hypomanic episode is a distinct change in mood but doesn’t necessarily cause difficulty with daily life. The shared symptoms between the two, three or more must be present to be classified as an episode, are the following (these are not direct effects of something else such as drugs, medication, or another medical condition):

Both Bipolar Type I and Bipolar Type II share the same levels for depressive episodes, while Cyclothymic only has a mild depressive episode. DSM-5 has the following criteria for a major depressive episode: five or more of the symptoms listed below must be present for over 2 weeks, at least one of those symptoms must be depressed mood or loss of interest/pleasure, and must be based off of your own feelings or on the observations of someone else. Symptoms are severe enough to cause difficultly with daily life, are not a direct influence of something else, and are not caused by grieving.

There are also other signs or symptoms of Bipolar Disorder, but these are not included in the criteria from DSM-5:

The exact cause of the disorder is unknown, but has been linked to biological differences such as physical changes in their brain, chemical imbalance, and inherited traits. The disorder may be triggered for the first time in times of high stress, drug or alcohol abuse, or major life changes such as a death of a loved one or other traumatic experiences.

I was diagnosed with Bipolar Disorder Type II when I was 18 during my freshman year of college. But that’s not when I first experienced this disorder. I first encountered this when I was in the eighth grade, but it was not severe so it was easily ignored as just a phase I was going through.  But it wasn’t, I was silently dealing with the the episodes and self harm. This went on until senior year of high school when it was took a turn for the worse and I could no longer silently manage. My sleep was almost non-existent, I had no interest in doing anything anymore, and I could no longer see a future existing for me. I thought I was dealing with depression and insomnia, so when I turned 18 in May I went to the doctor to see help since my parents were ignoring the sign believing it to be related to high school ending.

They made me take a depression test, which is where you rate your current state on ten different things. This test is great for detecting depression, but when there is another factor such as a hypomanic episode it’s not accounted for so many such as myself are falsely diagnosed. So they put me on depression medication and sleep medication. It took several tries before they found one that suppressed the depressive episode and made it so I could sleep at night. I don’t remember what the depression medication was called in the end but sleep medication was Ambien. Or at least they thought they did (I will get into that in a moment). But I wasn’t feeling the greatest and the therapist I was seeing was not helping. She kept trying to convince me that I had a horrible childhood, which I didn’t, and that basically running away was the perfect solution. Again not helpful in confronting a major chemical imbalance, which is all I have.

So summer had ended at this period of time, I was off to college at Montana State University where I would have no friends and my family would be far away. I was still taking my depression medication and Ambien. I mention this as it revealed to the doctors what was truly going on in my head. See I didn’t realize this as I quite frankly don’t remember this, I was experiencing hallucinations/delusions after taking Ambien and the depression medication was triggering the hypomanic episodes to become very pronounced whereas they were easily over looked in the past as “Mae’s feeling better and not experiencing depression.” Which was true but it wasn’t a state of mental stability. My dorm mates pointed this out to me one morning after I had apparently went to the bathroom and talked to a random “red snake” then went into one of their rooms with a very bloody hand. I also apparently spun around in circles saying I was a “bunny ball.” No idea, don’t remember.

That next morning, one of my dorm mates took me to student health where they signed me up to see the physiatrist. I protested saying it was nothing but there was something. The doctor at student health took me off of Ambien and added it to the list of things Mae’s allergic to so no one would prescribe me the medication that was causing me to hallucinate. Then a week later I met with the campus’s physiatrist for an hour to discuss my mental history and he determined I had Bipolar Disorder Type II. Now at my previous therapist office, I did take the Minnesota Multiphasic Personality Inventory (MMPI), which is a test of about 500 questions. It came back inconclusive though it did indicate some presence of Bipolar Disorder. I had insisted on taking the test after seeing Demi Lovato’s interview after she announced publicly that she had Bipolar Disorder. It had just hit home so much that I felt I needed to see if I had it. So after being rightly diagnosed I went on lithium and lamotrigine (which tastes like eating chalk in my personal opinion). And I hated it, yes I felt more stable but I hated the taste and I hated having to get my blood drawn every week for lithium. Though I was glad to finally be diagnosed with something, I didn’t want to accept it. So after two years of being on medication, I took myself off it claiming I couldn’t tell if anything was my own or if it was just from the medication.

I also was having severe anxiety about taking medication again when I deemed myself no longer worthy of determining my own mental stability. But I didn’t go to the doctors or a therapist about this, because after a year of them changing doses and telling me my childhood was horrible (again, it wasn’t), I didn’t want to talk to them anymore. Around this same time, I was financially broke and not sure of what I wanted to do academically anymore. This meant I was going back to Minnesota and I had been off medication for six months.

Disclaimer: Now this is not something I would advise, I’m just saying it’s what I’ve done. You should see professional advisement before doing this. I just didn’t.

I got a job at Staples and signed up for night school so I would be working all day and studying all night, so I wouldn’t have a spare moment to think. I still noticed when an episode was happening but I forced myself to stay busy so I couldn’t stop to dwell in it. And it was hard, especially during a depressive episode, because I wouldn’t want to do anything. But I forced myself to work through it. I’ve moved on from Staples to a job in the career field I always wanted to be in and now I don’t notice them as much anymore. I still have periods of hypomanic episodes and depressive episodes, but I supposed after accepting the disorder and being new coping mechanisms I can manage it on my own without the need of medication or therapists.