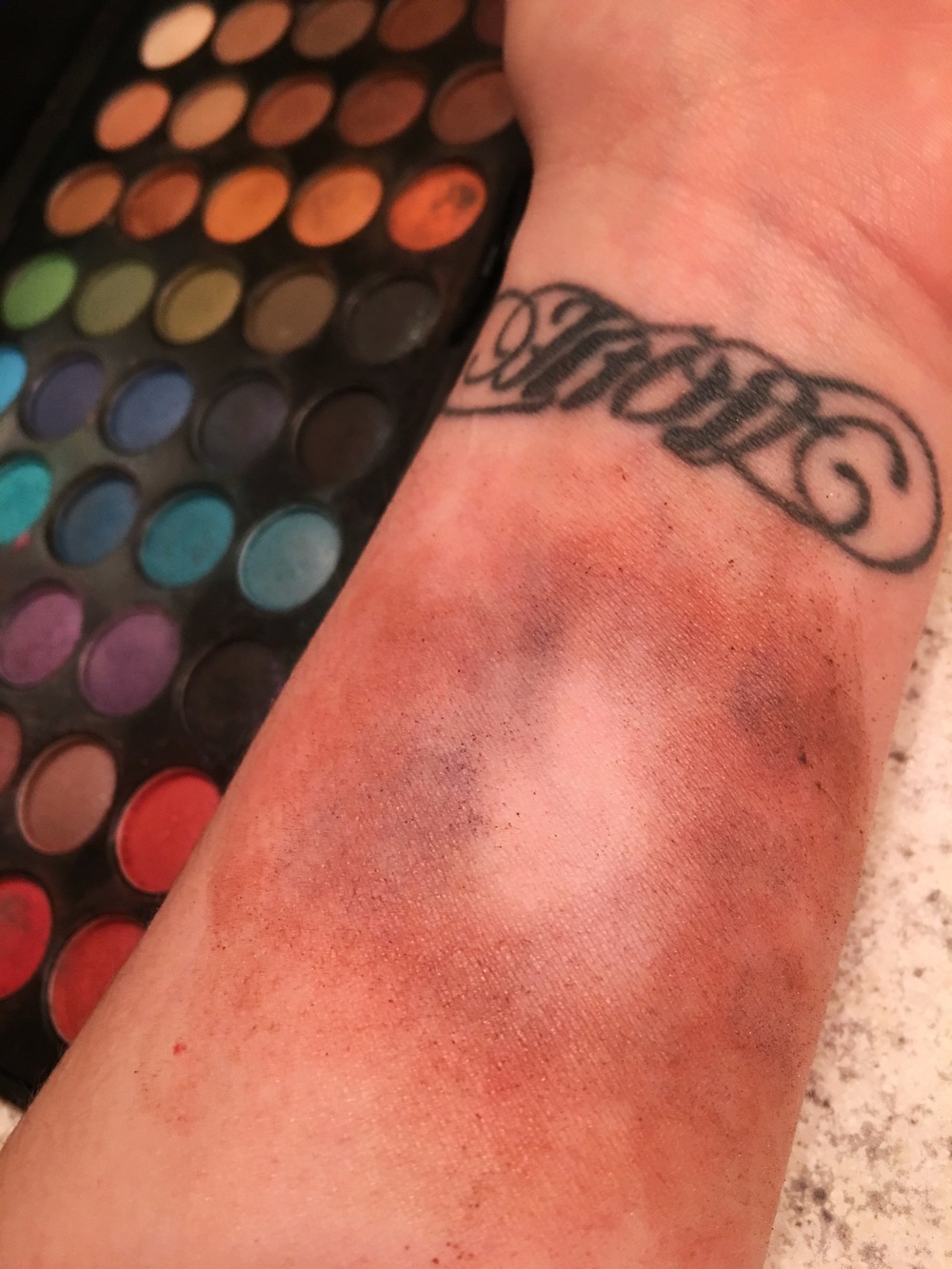 One thing I found a serious love for lately was SFX makeup. I’ve always love it but was never this into it before. And to be honest when I was little, I tried to make fake bruises all the time using my sister’s eyeshadow in order to get her in order for something she didn’t do because I was mad at her. Of course I didn’t know what I was doing so they never looked like bruises, more like giant blobs of brown makeup. Now I don’t do this anymore in attempts to get my sister in trouble. It’s more just something fun to do when I get home from work as a way of destressing. So I’ve been watching a lot of SFX makeup tutorials on YouTube trying to learn different things. One thing I think I’ve finally gotten down thanks to Mykie from Glam and Gore, is bruising. She uses cream and alcohol based paint to make her bruising but I don’t have that. So I used eyeshadow instead from a palette I got at Ulta. Unfortunately I have no idea what its name is, but the concept is the same as you just need similar colors. You will need: red, brown, and purple or yellow and green if you want an older bruise. 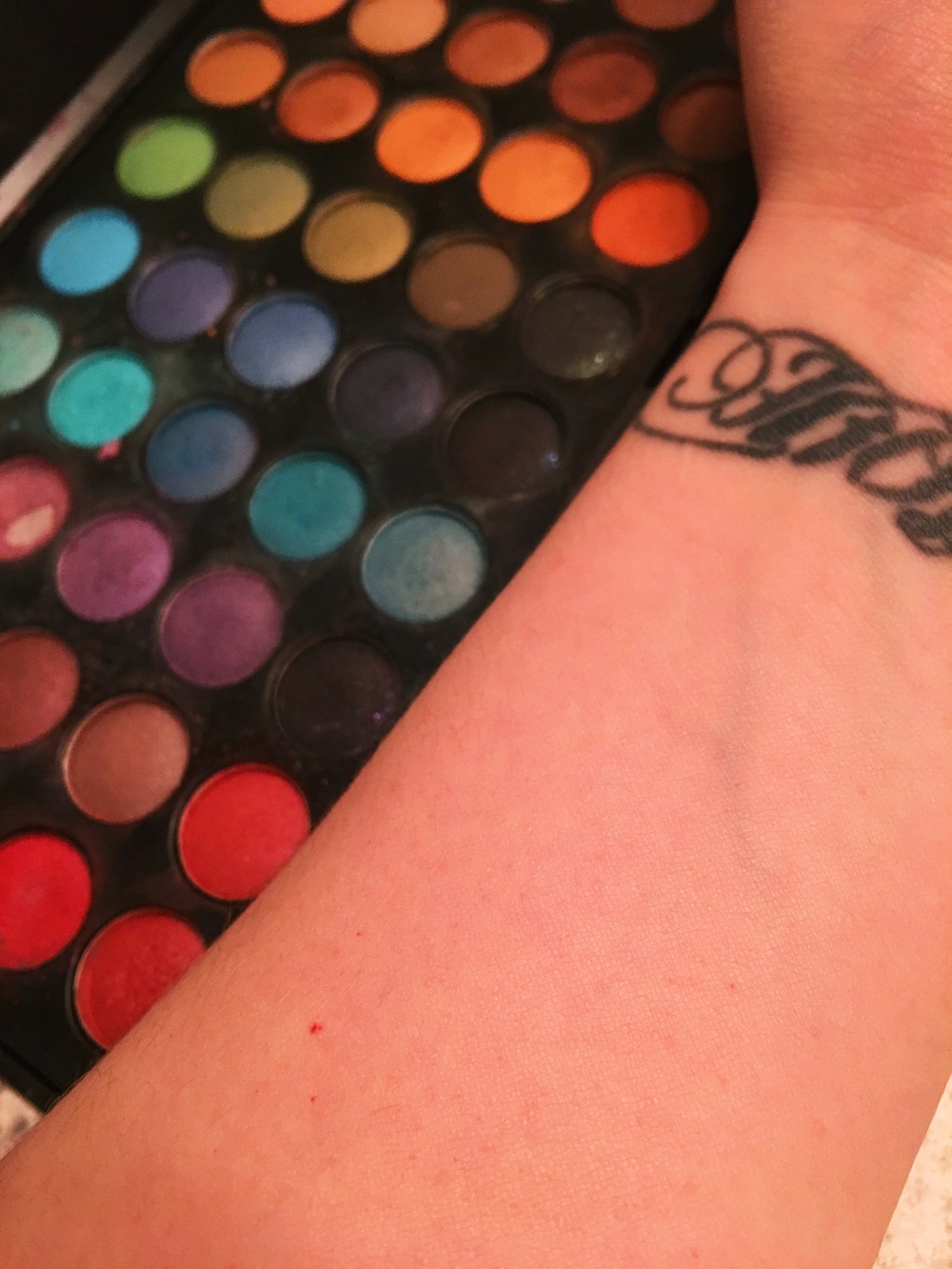 I’m making this bruise on my wrist as it’s easier to show for this tutorial. Bruises typically do not have discoloration in the center of the bruise. So you want to create an oval around the area starting with a blend of red and brown eyeshadow. Do not place it down neatly as bruising doesn’t look neat like eye makeup does. I’m just using a brush to make random spots closely packed together, moving it in different angles as I go to get the random effect. 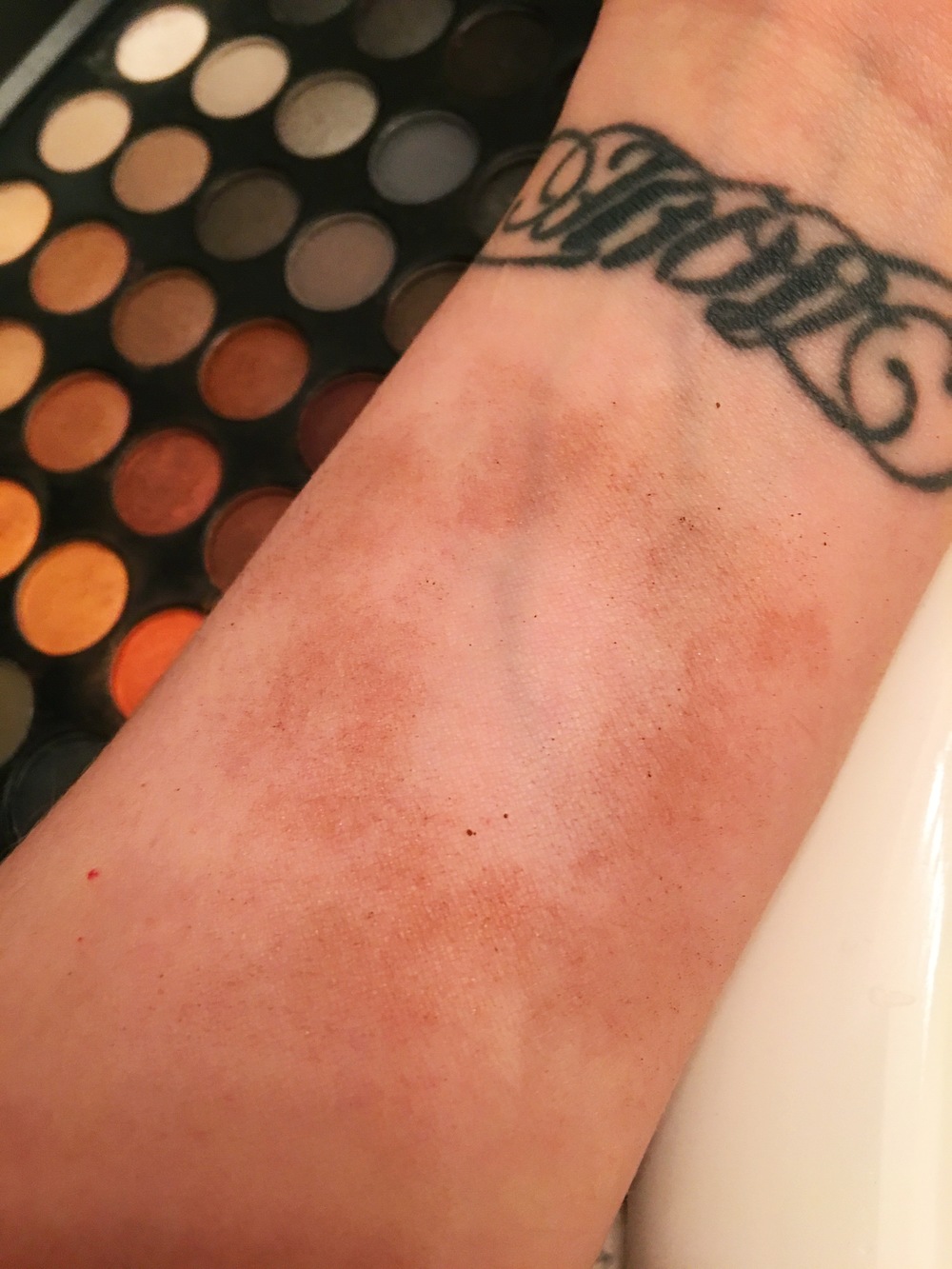 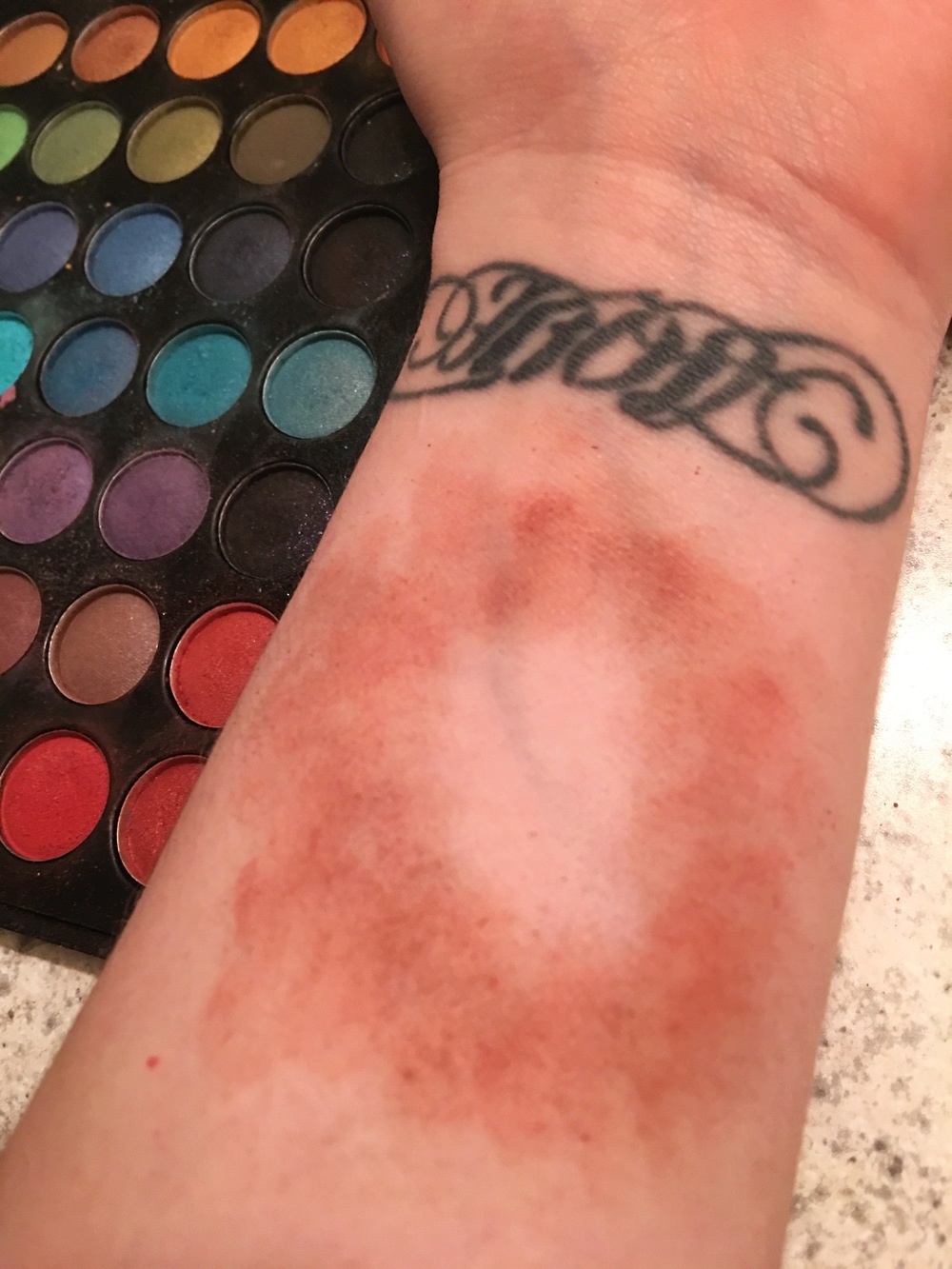 Once the red/brown layer is done, you will be moving onto your purple. This will be more concentrated on the inner part of your bruise towards the middle but not in the center. As blood typically pools in this area after a blow. 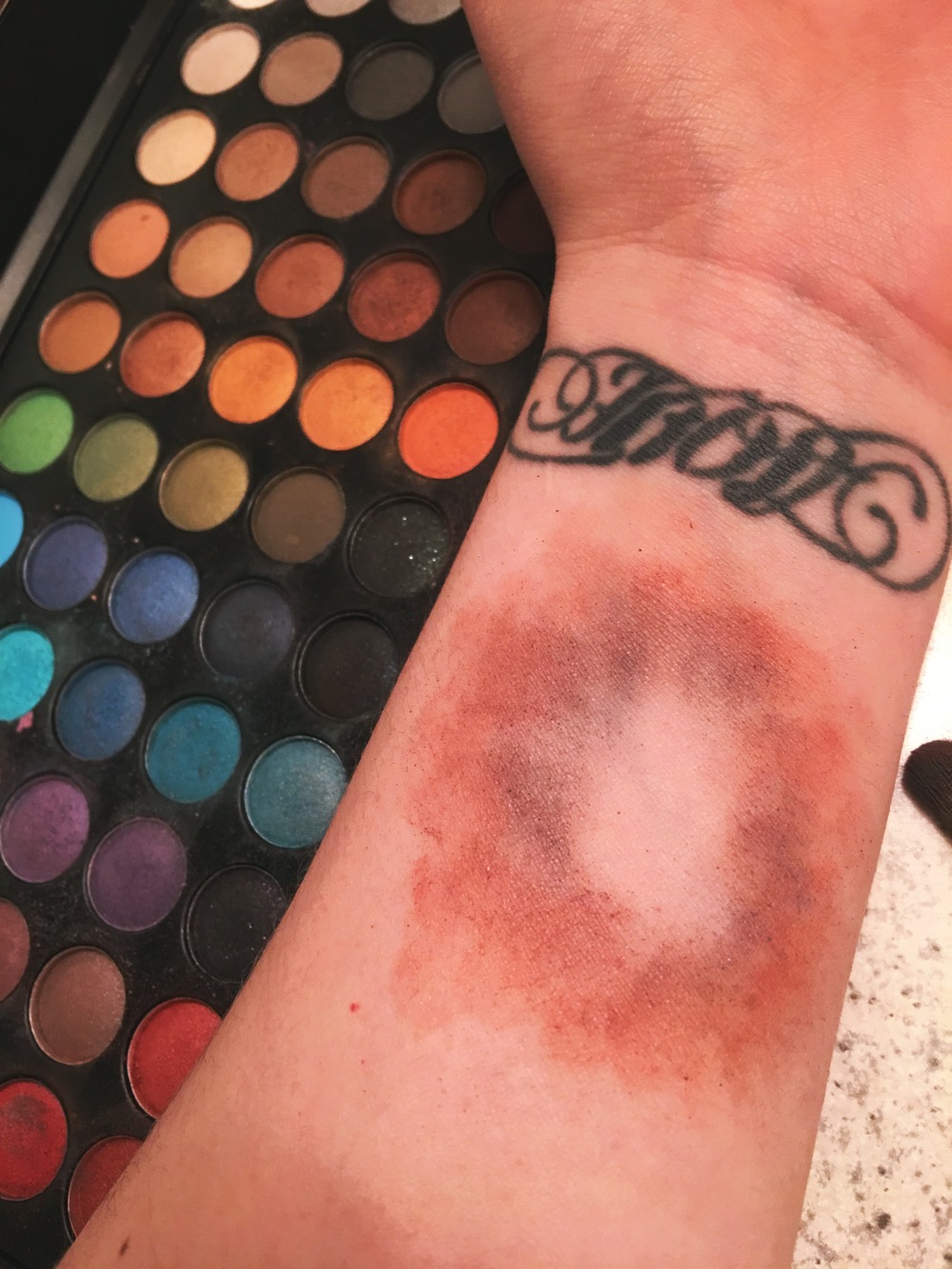 Then just go back in with your red and brown until you have the bruise in the right shape you want it in.

If you wanted to make the bruise look older you would put yellow or a yellow-green in the place of purple.

What SFX makeup do you like doing? Or what is your opinion of SFX makeup? I am going to be sharing more tutorials in this similar style as I learn.