Netflix recently came out with Chilling Adventures of Sabrina which is a dark version of the comics from Archie Comics. When I was growing up, I used to watch Sabrina the Teenage Witch. And I don’t know why when I saw this on Netflix I didn’t put the two together until I got a bit into the first episode. I kept thinking to myself, why does this seem so familiar. Then Salem got introduced and it finally clicked in my head. So I thought it would be fun to get into comparing the two adaptations of the shows. As they are both good in their own regards, but take the story of the Spellmans in very different directions.

Note there are some spoilers about the first season of Chilling Adventures of Sabrina ahead. So if you don’t want anything spoiled, then I would suggest watching the show first. If you don’t mind or have already seen it, then keep on reading.

For starters, the new show is a very dark twist on the tale. While the two focus on Sabrina the half mortal half witch, they take the story in different directions in regards to Sabrina’s background. In Sabrina the Teenage Witch her mother isn’t dead, she just can’t interact with Sabrina or she’ll turn to wax. Her father on the other hand is alive but divorced to her mother and trapped inside of her spellbook. While in Chilling Adventures of Sabrina, both of her parents mysteriously died in a plane crash. And had her baptized both at the Catholic church and to Satan. Yes that’s a major difference between the shows. The sitcom had a witch/warlock council while the Netflix original has a coven who worship Satan. Even showing the Dark Lord many times throughout the seasons.

Another difference is Salem. In the sitcom, he was a warlock turned into a cat as punishment for attempting to take over the world. And he had hilarious wit and sarcasm to him as he talked all of the time. However in Chilling Adventures of Sabrina, Salem is present but he’s quite different to the original Salem. For starters he’s a familiar meaning a goblin that turns into a creature to watch over a witch. He does talk as a goblin to Sabrina but through the rest of the show we don’t hear him talk at all. It is hinted in the final episode, familiars do have the ability to speak so we may hear Salem speak in the next season. But that is yet to be determined. Instead, the Netflix original includes a new Spellman named Ambrose who is under house arrest by the Witches Council for attempting to blow up the Vatican. So there’s still some Spellman who attempted to cause chaos, it’s just not Salem in this version of the show. Ambrose also is charming and witty like Salem was so you still get a character playing a similar role as the original Salem.

Next there are the aunts: Hilda and Zelda. In the original show, Zelda was intelligent and science minded aunt. While in the Netflix original, Zelda is a no nonsense witch that worships the Dark Lord’s rules to a tee and doesn’t put up with the family on getting on the bad side of the council. Hilda in the sitcom was loving and more easy going, while in the Netflix original Hilda is more softer and lacks confidence. I also don’t recall from the original show Zelda killing Hilda off all of the time and burying her in the Cain pit, or even there being a Cain pit in the lighthearted sitcom from the mid-90s. The bittering is still there but it’s on a darker level like the rest of Chilling Adventures of Sabrina.

Sabrina the Teenage Witch was lighthearted, goofy and brightly colored. With random episodes thrown in. She also waved her finger to do spells a large majority of time, though not always. And there was no mention of worshiping Satan. Though they did have a Council of Witches. However, as mentioned, Chilling Adventures of Sabrina is much darker. As Sabrina on her sixteenth birthday is told to go through a dark baptism to renounce her mortal half and sign the Book of the Beast thus handing over her freedom to Satan in exchange for power. She regrets this at first but later accepts and after summoning hellfire (fourth witch ever to achieve this level of power) her hair turns white which is a nod to the original Archie Comics. It also digs into the horror side of things and includes Sabrina’s dark education. Overall, Chilling Adventures of Sabrina is more like Buffy the Vampire Slayer in tone. While Sabrina the Teenage Witch is more like the 1960s sitcom Bewitched. 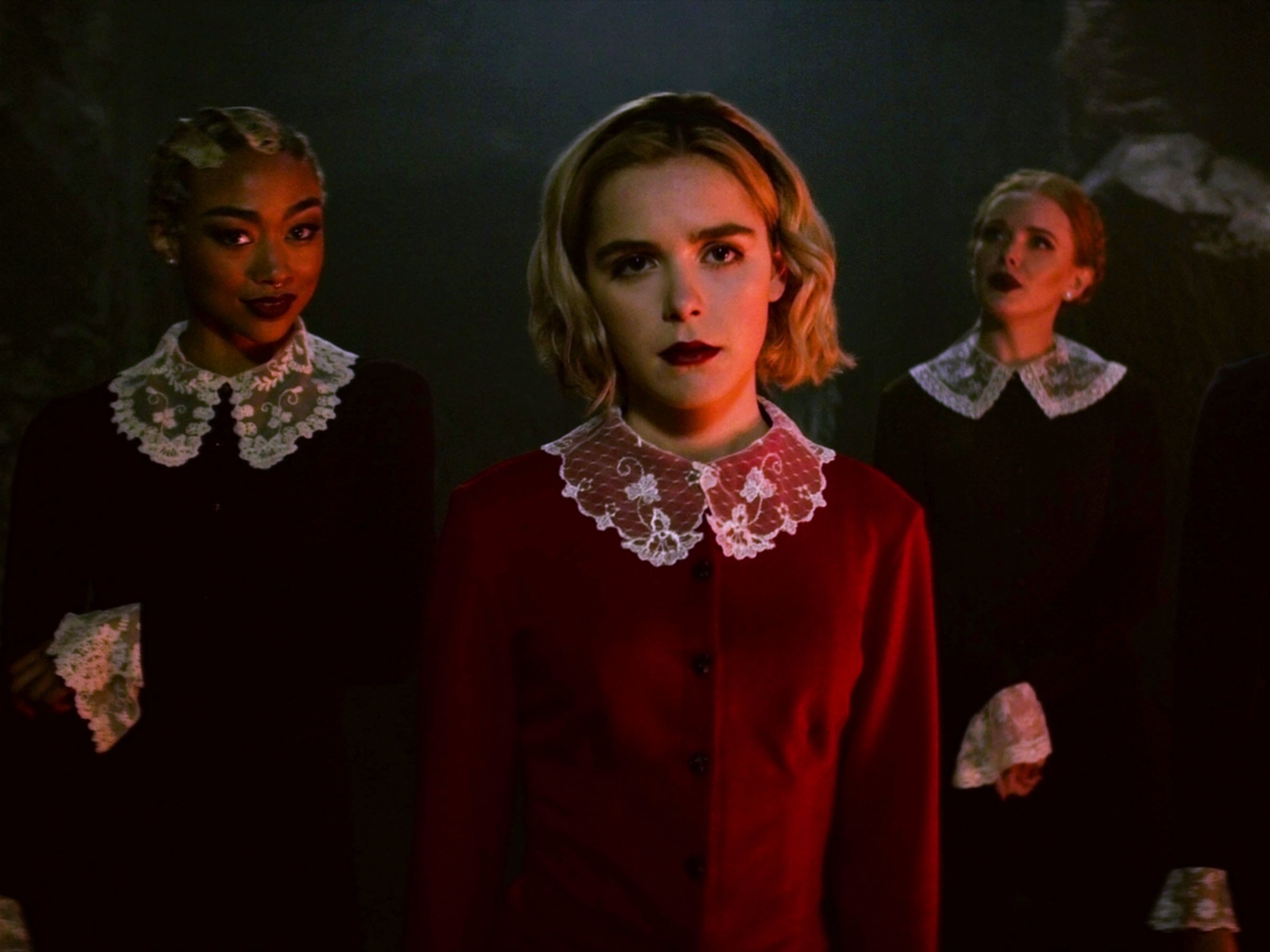 The location these shows take place is also very different. The 90s sitcom is located in Boston and Sabrina only just discovered she was a witch. While the Netflix original, is located in Greendale which is across the river from Riverdale. And yes, there is a show on the CW called Riverdale. There was a cameo from that show in Chilling Adventures of Sabrina. And there might be more cross overs in the future between the two shows now that Riverdale has added in the supernatural element this season. Also Sabrina already knew she was a half mortal half witch prior to her sixteenth birthday. And like Riverdale it’s hard to tell when the show takes place. A lot of elements are modern while others are from 60s, 70s, 80s, and 90s. Sabrina the Teenage Witch occurred in the present when the show was aired.

Overall, I like the new show and the darker twist as it brings more elements from the Archie Comics to life. I totally get why the CW didn’t air it due to the Dark Lord appearance, deaths, and darker tone. Though they have Supernatural so it’s hard to say. But we do not Ben from Riverdale showed up so they are still in the same universe though they are produced by different networks. What do you think? Let me know in the comments below!