One thing I loved about Dragon Age was how they handled religion in the games. From the Chantry to the dwarven ancestry to Elven old gods to Quarni beliefs. It’s rich and diverse and reflects a lot of similarity to that of ones in reality. They echo the real-life dilemmas and history of religions we deal with. And Thedas deals with hypocrisy, doubt, abuse of power, superiority complexes, and divisions. Which the main character either deals directly or indirectly with. Through Dragon Age, you can see how complicated religion is. How it’s not wholly good or bad, just something in between that you have to deal with. And there are many non-player characters of all beliefs that exhibit integrity, faith, courteous and careful management of power, attempts at equality, and attempts at unification. Further, acknowledging and understanding the religions of Thedas (and the real world) help the main character (and you) better understand culture, history, government, and different organizational groups. 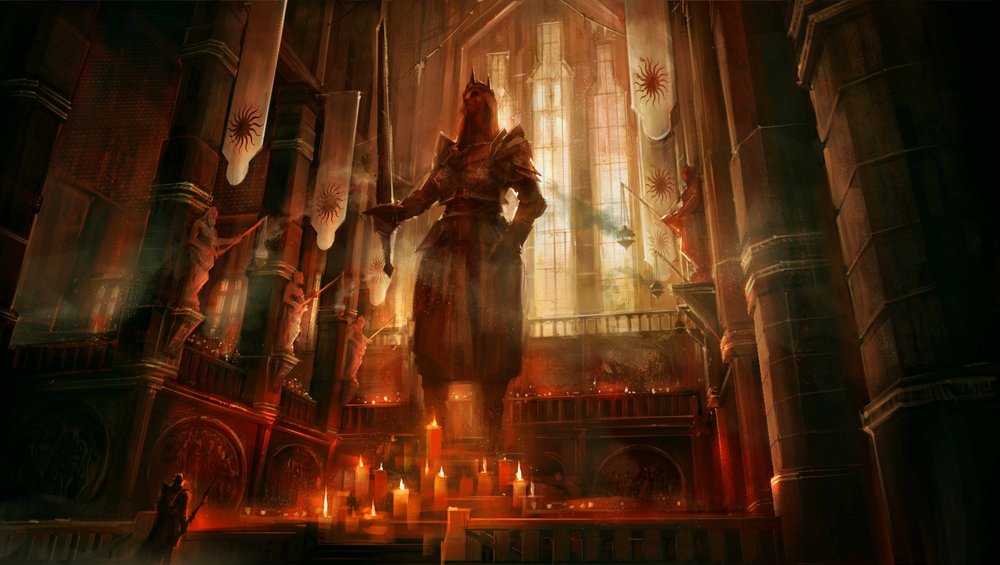 The main religion that you encounter during your journeys in Thedas is the Andrastian Chantry, which is a monotheistic religion. This is mainly a human followed religion and they follow one god called the Maker. This is similar to Christianity, Islam, and Judaism due to it’s complex structure and politics along with followers worshipping and convincing others to worship the Maker as well. I would argue it’s closer to Catholicism in nature. Like the church believes in God as the creator of the world, the Chantry believes the Maker created Thedas and all of its different lifeforms. Unlike the Christian God, however, the Maker is much colder and unforgiving toward its creation. Unfortunately for Chantry followers, a few Tevinter magisters had the audacity to challenge the authority of the Maker. This “original sin,” similar to that of Adam and Eve in the Bible, caused everyone to be cut off from the Maker. It was through the intervention of Andraste that Thedas dwellers had a chance to reconnect. And like Christianity, they have lead holy wars towards those of other religions.

Andraste was a prophet, heroine, and eventually bride of the Maker. She also has many similarities and differences to the Catholic saints and a Christ-like figure. She gained the favor of the Maker with her voice, which is why the people of the Chantry sing in worship. The Maker empowered her, and she devotedly began Exalted Marches (somewhat similar to the Christian Crusades) against Tevinter. In the end, she was captured by Tevinter and burned at the stake (like Joan of Arc). Her ashes have cleansing powers that can cure illness, which is distantly similar to the healing powers of Jesus.

Although the Andrastian Chantry is the most powerful organized religion of Thedas, it is not without problems. Similar to the Great Commission in the book of Matthew, Chantry followers must spread the news of the Maker to the four corners of Thedas. Like real-world Christian missionaries, the messenger is not often a welcome newcomer. Many missionaries are met with verbal and sometimes physical hostility. This issue is complicated by the Chantry’s own aggressive history of continued Exalted Marches against Tevinter and the elves. Political pollution of the clergy also led to power struggles in many forms, including the acceptance of elven slavery and subjugation for a time — somewhat parallel to African slaves in North and Central America.

Tevinter, despite being an enemy of Andraste, has its own division of the Chantry. In the Tevinter Imperium, mages are glorified, not feared. Thus, the Imperium claims that Andraste was a powerful mage, which heresy by the mage-fearing Andrastian Chantry. While mages are subjugated to severe policing and punishments by the Andrastian Chantry templars, Imperial Chantry mages often hold powerful clergy positions.

The Tevinter religion is further complicated by the fact that it was Tevinter magisters who entered the Fade (or the realm of the Maker, spirits, and demons) and committed the original sin of trying to usurp the Maker. These ancient Tevinter mages worshipped the old gods, or dragons. Many of the symbols and practices allude to theistic Satanism and modern witchcraft (magic rituals, winged serpents, defiance of God). As punishment for this, the Maker converted the bodies of the magisters into hideous monsters (darkspawn) and set them loose in Thedas. Thus began what is known as the First Blight. Like real-world evil, only through great toil and loss may the Blight be temporarily overcome.

Old Gods of the Elves

Unlike the humans in Thedas, the elves are polytheists. Similar to the Celtic deities or the Greek/Roman gods and goddesses. They believe in a pantheon of gods and goddesses, which are referred to as the Creators. Like the Celtic, Roman, and Greek polytheists, elven worshippers are subject to the wiles and whims of their deities. The elves also have a respectful and fearful connection with nature that is almost sacred. Familiar folklore, such as tales about werewolves and enchanted mirrors, also makes appearances among the elven storylines in the DA series. True to some polytheistic religions, oral stories and warnings are used to indoctrinate the next generation of elves.

Due to the silence of the pantheon in recent Thedas history, the elves have been frantically struggling to preserve their lore. There is division among the clans, however, leading to different versions of the same stories. Clashes with other religious and cultural groups of Thedas have brought even more division and confusion, leading to mixed feelings and muddled accounts of the past. This has caused a significant number of elves, like the Greek and Roman polytheists, to reject their belief in the pantheon and sometimes convert to other religions entirely.

This race of giants often seen as invaders from the tropical North have a philosophical religion. Similar to that of Confucianism. They live and believe in their social ethics known as the Qun. Which also is their societal/political structure. The ideas, described by the philosopher Ashkaari Koslun, are not the same as Confucianist beliefs, however. The Qun focuses primarily on what each Qunari was predestined to do and therefore does not tolerate deviance or questioning of authority. Those who reject the Qun are shunned by the Qunari, similar to excommunication from the Catholic church or shunning by the Amish, but harsher. The Qunari value strength and power, order and devotedness. They are also conquerors and sometimes seek to forcibly convert new followers to their beliefs.

As magic is a huge part of religion in Thedas, Qunari clash with the Tevinter Imperium as they are wary of magic while Tevinter openly embraces it. Any Qunari born with magic is enslaved and shown very little mercy. Often having their mouths sewed shut and killed if they were to speak a single word as shown in Dragon Age II. The Qunari’s way of life doubles as their religion, so magic is not tolerated within their religious beliefs. Because the Imperial Chantry upholds Andraste as a powerful mage, it makes them the natural enemies of the Qunari.

Dwarves compare to atheists or deists, and their beliefs is depicted as followers of the Stone. It is said that Dwarves are incompatible of dreaming so they are disconnected from the Fade and the Maker. Which makes them skeptical of other religions. Refusing to believe in gods of any kind, most dwarves instead believe in their own individual power and that of the earth. The greatest contributors to society are elevated to the status of a Paragon. Paragons have nearly legendary status among the people and are revered like many Americans idolize pop culture icons. Ingenuity, competitiveness, and strength are also valued by the dwarves.