To begin the month, I dyed my hair red which is something that I wanted to do ever since junior high school but my mom never let me. And I have to say since dying my hair, I feel so much more like myself then I have in a long time. Granted I really miss having long hair and ended up dying my hair extensions that I got for free last summer from Irresistible Me. I’m actually going to purchase a ponytail extension from them then dye it myself to match everything else. My mom and sister hate my hair color to a point where they don’t want to be seen in public with me if we’re in their city. But I don’t care, I flipping love it. And I don’t know if I’m ever going back to dirty blond again in my life. But you never know, that may change one day. 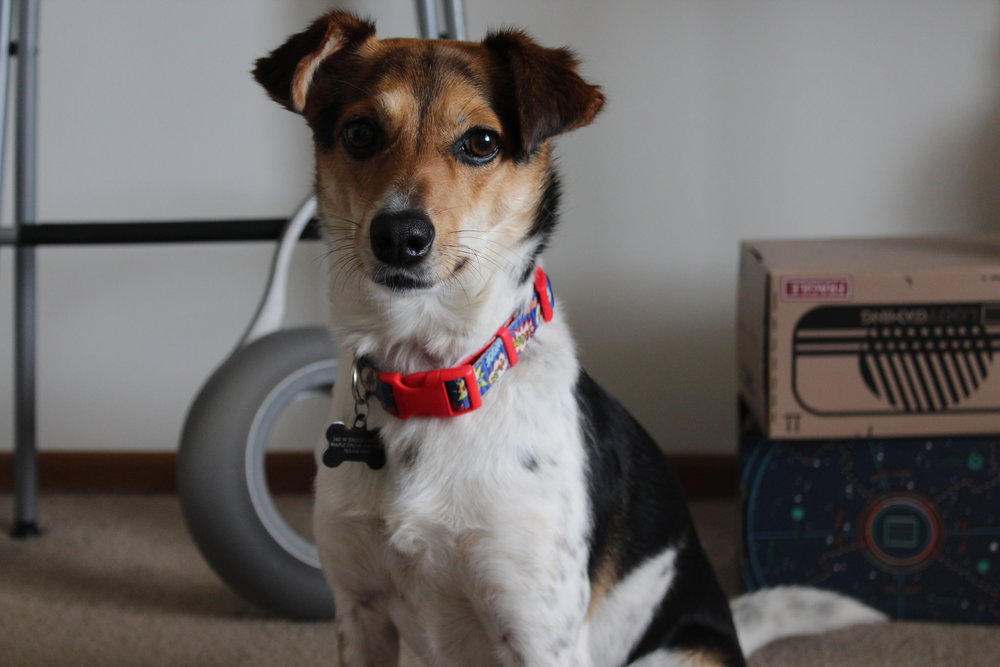 I finally got to see Mimmy and meet her new puppy, Emmett. She has been one of my best friends since high school. And last year she moved an hour away so I don’t get to see her as often as I used to. So it was really nice checking up while the dogs had a playdate. Now as for why I brought Pixie along with me:

Winnie has officially been part of the family for a year now. And this month she had a lot of digestive issues which I think is finally over. They have no idea what it was but it literally took the entire month with medication for it to pass. Luckily it wasn’t the issue Pixie had a few months ago.

My depression has been really bad this month as well. Which is nothing new, but has severely impacted my outlook on doing things. I haven’t really left the house for anything other than work all month because of it. Hopefully this cycle will end soon and I can either go into a hypo-manic phase or just back to neutral for a while. Either I would happy with at the moment. It’s almost at the point where I’m debating on going back in to get on medication, which I haven’t been on in four years. But at the same time, I still can barely force myself to take pills for a cough or pain medication without cringing. I really hate how my mind freaked out randomly about that after getting sick one time… then again the same thing happened after I got the flu and now I won’t eat at Subway even though I know the sandwich wasn’t the reason I was violently ill that one time. Plus I have a phobia about medications causing my emotions to not be my own. Logically I know that’s not true, but my mind likes to play games on me. If anyone has tips on how to get around this, please let me know as this is annoying as hell.

Yesterday, I went with Rose to see Wonder Woman which was obviously amazing! I love the recreation of one of my favorite comic book characters brought to life. The movie takes place during World War I (The Great War) which not a lot of movies these days take place during this time period as if it’s going to be a war movie of the past they go to WWII. Examples being The Imitation Game, Captain America: The First Avenger, War Horse, The Book Thief, and Hacksaw Ridge all took place in WWII. But The Great War, was a perfect time period to set this movie in as it’s the perfect setting for Wonder Woman. As her whole focus is stopping war and Aries, so why go to WWII when WWI was referred to as “The War to End All Wars.” Granted the comic books take place during World War II, but I am actually really pleased it went to the war before that. Plus it’s a good reflection on our current world state. Nationalism is very similar as it was during that time period and it would take very little to spark global conflict. Sure WWI wasn’t the final World War, and is outside of living memory at this time period but it is a has all the right elements to tell this tale. I’m not going to spoil anything that happened in the movie outside of the VERY vague plot summary and time period I’ve already mentioned, but I’m probably going to get this movie when it comes out on DVD so I can watch it over and over again.

How did your month go? Also if you’ve seen Wonder Woman what is your thoughts without any spoilers for anyone who hasn’t seen it yet?