So October besides being my favorite month of the year for season, weather, holidays, etc. has been a bit of a lot. From Ariel moving out at the beginning of the month to buying and decorating the entire lower level as we had nothing after she left, to my mom deciding she wanted to start dating after being separated/divorced from my father for four and a half years. And not just like dating if she meets someone in person, but dating online and she doesn’t understand computers so I had to help her set up and run her dating profile. Which is probably the weirdest thing I’ve ever done.

With Ariel moving out at the beginning of the month, the entire main floor had no furniture as she either sold it or took it with her to New Jersey. So Harley and I had to furnish the entire lower floor. Luckily my aunt had some of my grandma’s old furniture in her barn that we could have. This covered the dining room table with three chairs and a living room chair. My mom also gave us a hutch she wasn’t using which has become our fancy book display on the main floor, while the rest of the books are either in our bedrooms or in the new office. Harley also purchased a couch and chair that were a show piece for someone previously. Which means we actually have nice looking furniture that has not been used, so basically like a new couch and chair. Then we had to find a coffee and end table, as we really needed a big piece to make it all look very uniform. On top of that we had to get a TV stand and TV, not that we use it so often for television but both of us do want to make it into a gaming area.

I also got to go apple picking with month, which is something that I’ve wanted to go all fall. I tried in September to go back the orchard didn’t have any apples left that could be picked. But we finally found a place to go and got to pick quite a bit of apples. Which Harley and I have thoroughly enjoyed. Including the apple donuts! 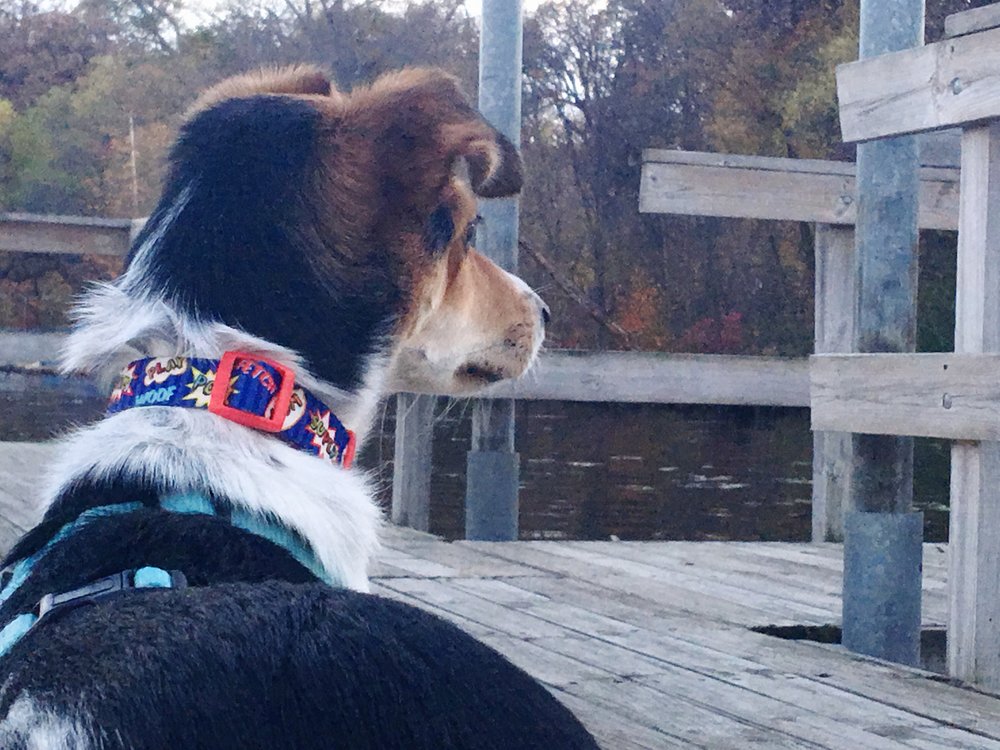 I also love that the month has taken crisp evenings with changing leaves as it makes for gorgeous walks with Pixie. And since it’s cooler there aren’t hoards of people at the lake so I can sit on the dock and just relax. It’s the best stress relief.

Mimmy and I along with one of her friends from high school went to Anoka Haunted House which has so much fun. It wasn’t a rather big haunted house but it was only $10, which was a good price for the length of the haunted house. Wished there was more though as we got through it fairly quickly. But that was maybe my bad, as I was leading the group and I didn’t like pause in all the rooms as the group in front of us had. I just joked then kept moving. About half way through we had to stop outside each of the areas because we kept catching up to the family in front of us. After the haunted house, we drove to Dayton, MN for Dehn’s flashlight corn maze. Which apparently was set up in the shape of a minion. But so many people had gone off trail that you literally only needed to take an immediate right then another right to get to the exit. But it was still fun as we just made it a point to get lost in the maze and then try to get back going a completely separate way.

This upcoming Halloween weekend, I’m starting the weekend off by going to a midnight showing in Uptown Minneapolis, Minnesota of Rocky Horror Picture Show with Harley. And of course we’re dressing up for it. I’m going in Pajamas Columbia. Then the night afterwards I’m going out with Harley who is going to be dressing up as Harley Quinn and my best friend since high school Mimmy. I don’t know what she’s going as but I’m going as Poison Ivy though I don’t know what I’m going to wear as I don’t have a costume already for that. But I know I’m going as Poison Ivy.

Hope you all had an amazing month and a fantastic November.