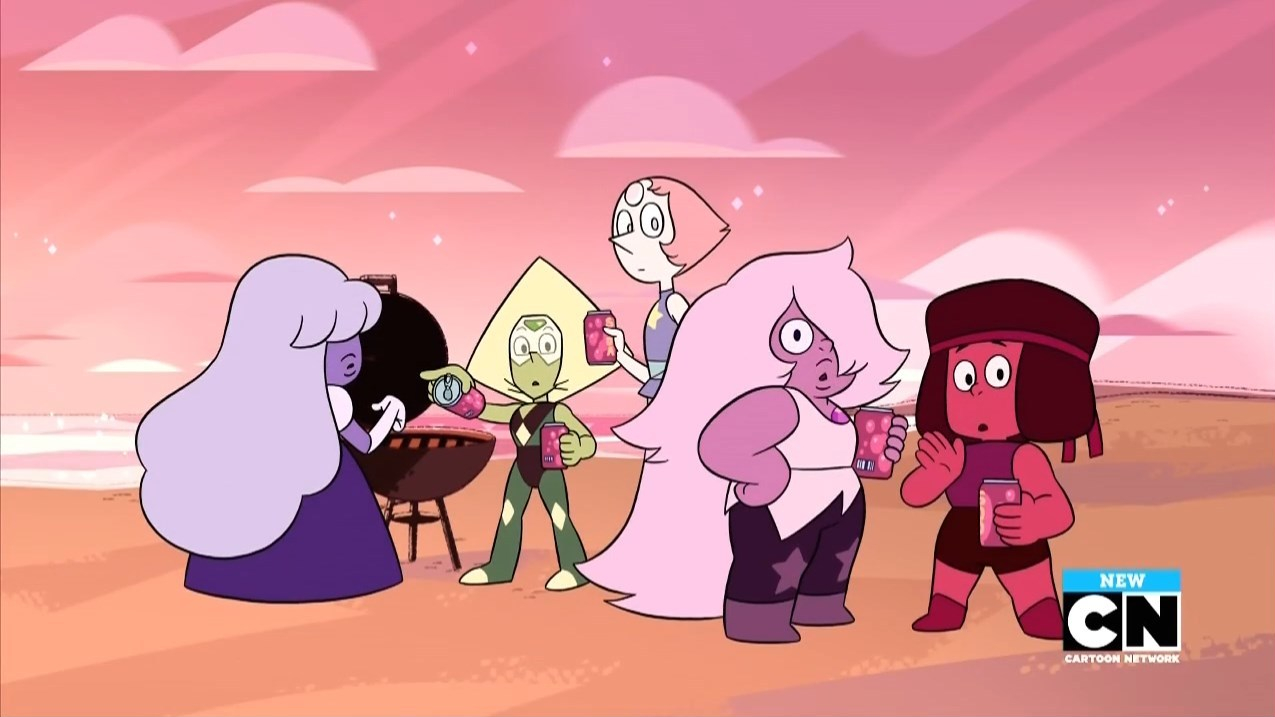 Over the last week, Cartoon Network has released one episode a night of Steven Universe under the arc called “Heart of the Crystal Gems.” Which contained five episodes happening after the events of A Single Pale Rose where it was revealed that Rose Quartz/Steven was actually Pink Diamond. And leading up to the point of the arrival of Yellow and Blue Diamond to Beach City. Now I don’t generally write up my thoughts after binge watching a new season, but I really wanted to for Steven Universe.

All images belong to Cartoon Network.

The title of this episode is a call back to a show Garnet sang called “Here Comes a Thought” where there is a line in the song that goes: “Take a moment to and ask yourself if this is how we fall apart.” The song was in part talking about anxiety but also fusion which requires that both parties stick together through situations. And in the case of Ruby and Sapphire, they fell apart because they couldn’t agree over the news about Rose Quartz/Pink Diamond. Sapphire felt betrayed because she didn’t question their fusion or anything about their leader. And learning it was a lie, made Sapphire lash out. Unfortunately at Ruby and calling their entire relationship a lie. She runs away with Pearl and Steven following after her to try and make things better.

Pearl explains she was given to Pink Diamond in an attempt to make her happy around a 1000 years before Pink Diamond was given the Earth colony. But Pink is bored as nothing is happening until Pearl informs her of the first quartz soldiers are coming out of the ground. Pink sees them emerge and is super excited about everything still believing their mission that they are making life out of nothing. But is sad that she’s not actually there to talk with everyone. Pearl suggests disguising herself as a quartz so they can go see the new gems, which they end up doing including seeing the rest of Earth… where Pink learns they aren’t making life out of nothing. They are taking life and leaving nothing of the organic life already there. This leads her to protesting that the colony not to be completed to Yellow and Blue, only to be told to complete the mission. Yellow and Blue also made Pink the human zoo to humor her about her love for the organics. Pink ends up becoming Rose Quartz that we know and starting the rebellion.

Instead of using her status and halting all progress of the colony… which she could’ve done. She was the diamond in charge, not Yellow or Blue. If Pink truly didn’t want the colony to complete, it was completely in her right to say so. But she wanted Yellow or Blue to end the colony for her, rather than stopping it herself. And I get why Yellow and Blue didn’t want Pink to just quit the colony. She begged for centuries for one of her own, then the second she started it she wanted to be done. It’s like any child who wants to start a club or sport. The parents got them all of the stuff and spent all of this money, just for nothing. No, you make them see it through to the end. And if they don’t want to do it again the next time, fine but they at least completed the current season or year. 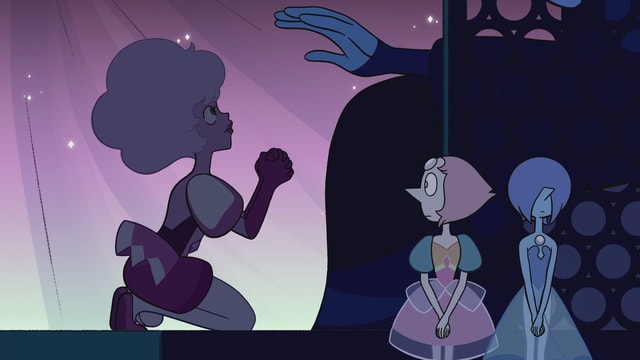 Then Pearl and Rose Quartz see the first time fusion of Ruby and Sapphire, making Pearl and Pink learn that any gem type can fuse. Pearl tries to fuse with Rose Quartz but it doesn’t work, then they meet Garnet and recruit her onto the team. Now wanting to fight for gems that are different. This makes Sapphire feel better and want to go back to Ruby… who has ran away leaving a note behind for Sapphire.

A lighthearted episode after the last one that also saw the completion on Amethyst character arc. Now I don’t think that will be the end to her story, but it’s for sure the moment where she’s figured things out. She doesn’t want to put her 1000 year old problems on Steven. She wants him to be a kid and not worry about all of the problems going on. Amethyst tries to spend the day making Steven feel better after learning the truth about his mother. It also made her the most mature one out of the group in comparison to Sapphire, Ruby, and Pearl. And though it wasn’t heavy on plot or development of Steven, it was a major step for Amethyst while trying to keep everything lighthearted considering Ruby ran away.

This title is a call back to The Answer, where Garnet was telling Steven about how Ruby and Sapphire met. And that love was the answer to what their fusion was. This episode sees the reverse of that, but also Ruby asking Sapphire to marry her. 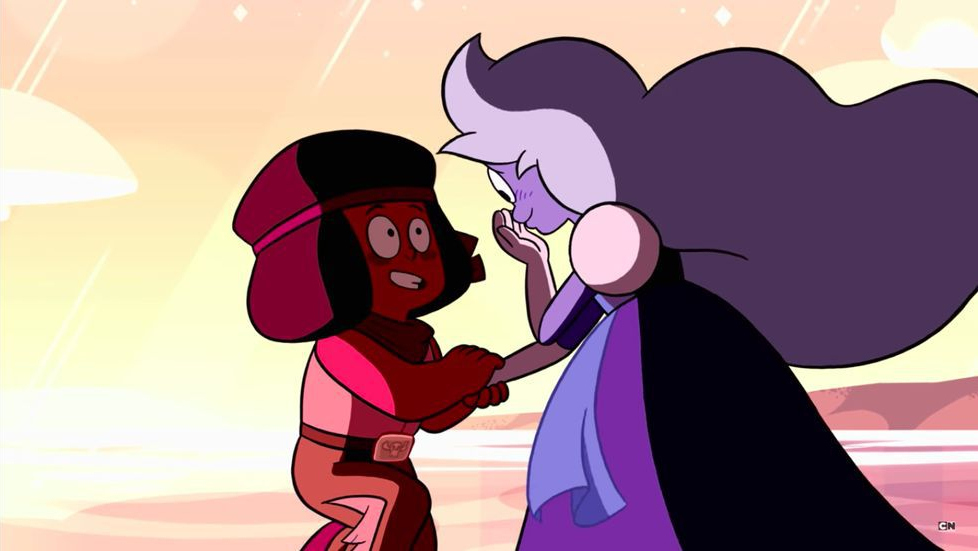 In this episode, Ruby is on her own trying to figure out who she is when she’s not solely focusing on being with someone else. Something a lot of people deal with after a breakup or in a relationship in general. You spend so much time with someone that you lose who you are when you’re not with them. And even though you are apart, you still think about them being there with you. Ruby would look at her hand where Sapphire’s gem would be if they were Garnet. And though it was told as if it were a Western leading up to Ruby proposing to Sapphire in the end, I loved it as it was so real. And I’ve been dealing with something similar myself, granted instead of a relationship it was a friendship that ended. I’ve been trying to figure out how to be me again with her being around, only I know there isn’t going to be a proposal or reunion in the end because she wants nothing to do with me anymore.

This episode brought back the character and Crystal Gem named Bismuth. Who had been bubbled away in the temple after she had attempted to shatter Rose Quartz/Steven. After the discovery that Pink Diamond was Rose Quartz, Steven felt it was only right to bring back Bismuth and explain everything. Also considering Ruby and Sapphire were going to be getting married, but were sad that all of their friends were either shattered or corrupted. So Steven wanted to bring her back and explain everything that happened while she was bubbled. From the Gem War to present day. It was a cute little episode bringing back one of the Crystal Gems and reconciling the past between Rose Quartz and Bismuth.

The last episode in the special including the wedding of Sapphire and Ruby. Peridot was the flower girl and Steven oversaw the wedding. It was hilarious watching Peridot throw flowers into people’s faces rather than just to either side of her while she walked down the aisle. Ruby was so excited she set the aisle on fire and Sapphire was nervous freezing in place for a brief moment. It was perfect! And in the end Garnet was back in a dress/suit combo to reflect Sapphire and Ruby. 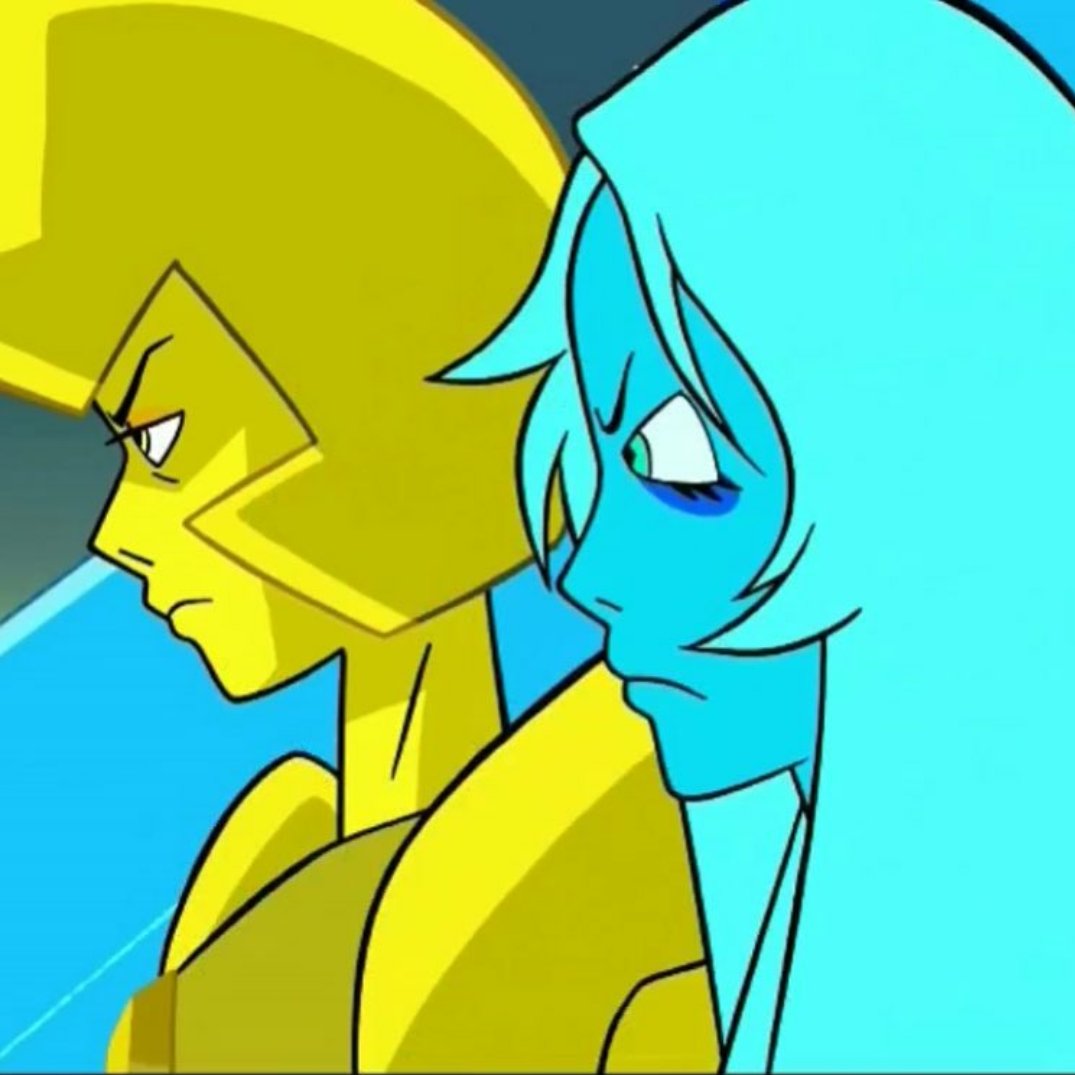 The cluster managed to beat Yellow Diamond and caused the ships to crash down on top of Blue Diamond. When Yellow came out, Steven of course tried to stop her by stating for a second time that he was Pink Diamond. But they wouldn’t listen to him… and of course why would they. Pink Diamond didn’t look like that at all and the gem was rotated. So they attacked everyone causing both Peridot and Lapis to be poofed. In the mix, Steven somehow got poofed or something, and ended up in a weird in-between state where he could communicate with the gems without being in the physical world. We got to see their inner thoughts including both of the Diamonds. Yellow was mad about not listening to Pink, and Blue was sad that Pink was gone.

Steven was able to get through to them somehow and explain that he is Pink Diamond. Which made everyone stop fighting and understand what he was trying to tell them because of his aura was Pink’s. Blue and Yellow reach out to Steven then back in reality Blue just says “It’s you.” And the episode is over.

Afterwards, we are shown the crew all together with the diamonds. Blue and Yellow appeared happy or at peace. And Steven was talking to them about the fate of the remaining gems on Earth when it got blasted. Blue apparently thought they were destroyed/shattered, but instead they were corrupted and Steven was showing them that fate.

But when the 30-minute season was over, I didn’t want it to be over yet, I want to know what happens and how the conversation goes between Steven and the Diamonds. As the last second is literally just a second after they learn the truth. I wish it had more than just an quick glimpse at the future than a statement of “The Story Continues…” But nothing on when it will be back. What?!? You can’t just end it there then go “See ya!” I want to know what happens. What do Yellow and Blue say to Steven now knowing Pink Diamond became him and that he has none of her memories? What do they say or do about the gem corruption? I want answers! But we’ll have to wait… for who knows how long.