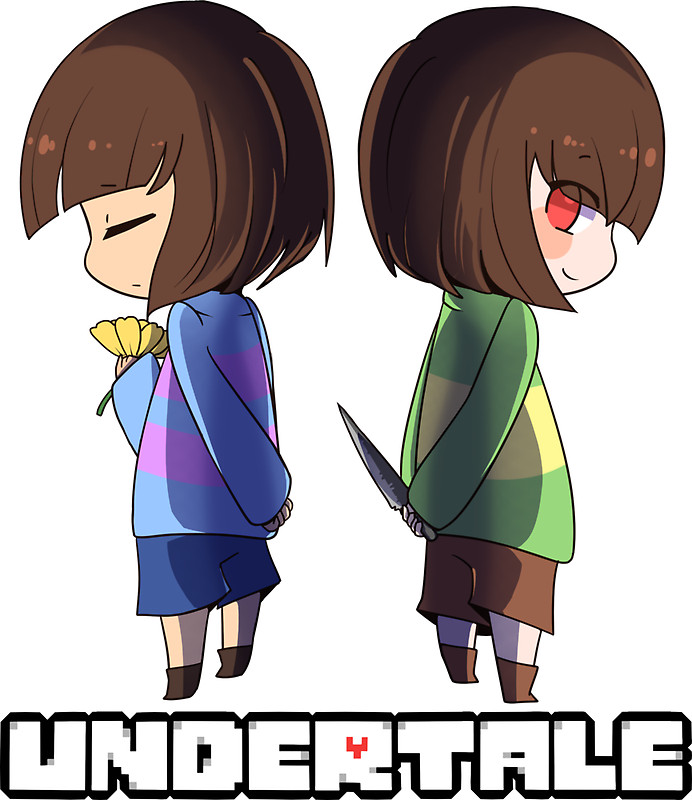 When you play Undertale, you have two choices on how to play the game. Well three if you consider the neutral route. But I’m not talking about that one as it basically just follows on of these two routes but you didn’t something you weren’t supposed to. The standard RPG style of killing all monsters which leads you down the genocide route or sparing all the monsters allowing you to play as a pacifist. The pacifist route is the encouraged route while you are playing the game based off your conversations with Toriel. And I do encourage that you play each route of the game as different parts of the lore are contained in each route.

This is the encouraged route when you start the game, you should also do this route first otherwise the ending will be tainted. You basically just have to go through the entire game avoiding attacks, sparing monsters, and befriending all the main characters: Toriel, Sans, Papyrus, Undyne, and Alphys. However, you will have to fight Asgore and Flowey but end up sparing them in the very end. 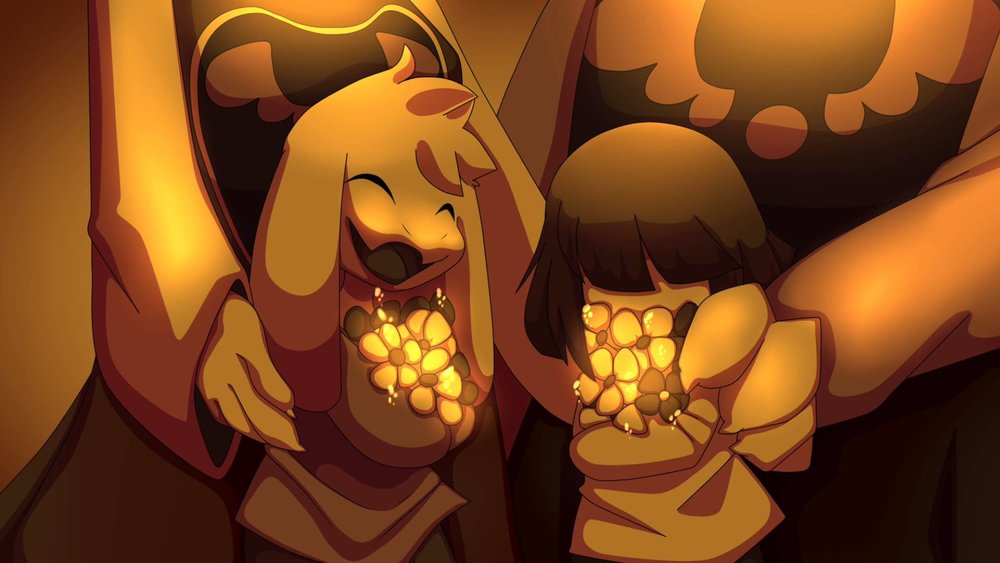 Toriel is befriended regardless during your time in the Ruins and if you spare her life. Though she will not communicate with you further in the game until you face off Asgore for the second time. Sans is befriended regardless as well as long as you humor his brother by completing puzzles, which you have to do anyways. Papyrus is friended after getting past his boss fight either by sparing him or getting captured three times, then going on a “date” with him at his house in Snowdin. Undyne is friended if you go to her house in Waterfall after reaching Hotland, Papyrus will meet you outside and leave you attempting to make friends with Undyne by drinking tea and having a cooking lesson Papyrus was supposed to be having. Alphys can be befriended right away by getting the letter from Undyne in Snowdin; however, Alphys will mistake it as the protagonist/Frisk giving the letter instead of just delivering it for Undyne. This will lead to a date where it’s very clear Alphys would rather be with Undyne. Then you convince Alphys to be honest about their feelings about Undyne and admit it to her. Undyne then suggests Alphys train her self-esteem/confidence with Papyrus, but that doesn’t actually happen as Alphys vanishes and you are told by Papyrus to go to the True Lab. This is where you learn that Alphys took souls of monsters and gave them DETERMINATION, but they couldn’t handle it and became Amalgamates (fusions of several monsters). You also see a determinator extractor that looks like Flowey during his boss battle in the Neutral route. After restoring power to the lab, Alphys thanks Frisk and states they will face everyone and release the Amalgamates back to their families. You will as this point get a call from Asriel that states “Are you there? It’s been a long time, hasn’t it? But you’ve done well. Thanks to you, everything has fallen into place. <Name>… See you Soon.” Name referring to whatever you named the first human.

During this route you start out as Frisk, though you don’t learn this until you reach the very end of the game with Asriel. As naming the character in the beginning is actually naming the first human that fell into the Underground, which is actually a character supposed to be named Chara. Frisk learns that Chara fell ill and died, leaving Asriel to take the body back to the human village after absorbing their soul. This causes Asriel to die where he later becomes Flowey due to Alphys trying to harness the power of DETERMINATION. Frisk learns this in the New Home area through all the monsters they encountered and showed Mercy to throughout the game.

This route will lead you to fighting Asgore and Flowey twice if you don’t befriend Alphys immediately which a lot of players including myself don’t end up doing as we don’t realize we have to go back to Snowdin to get the letter which leaves you with the neutral ending in which Flowey will allow you to return to befriend Alphys. Once you have entered Alphys’ True Lab the True Pacifist Route cannot be aborted. 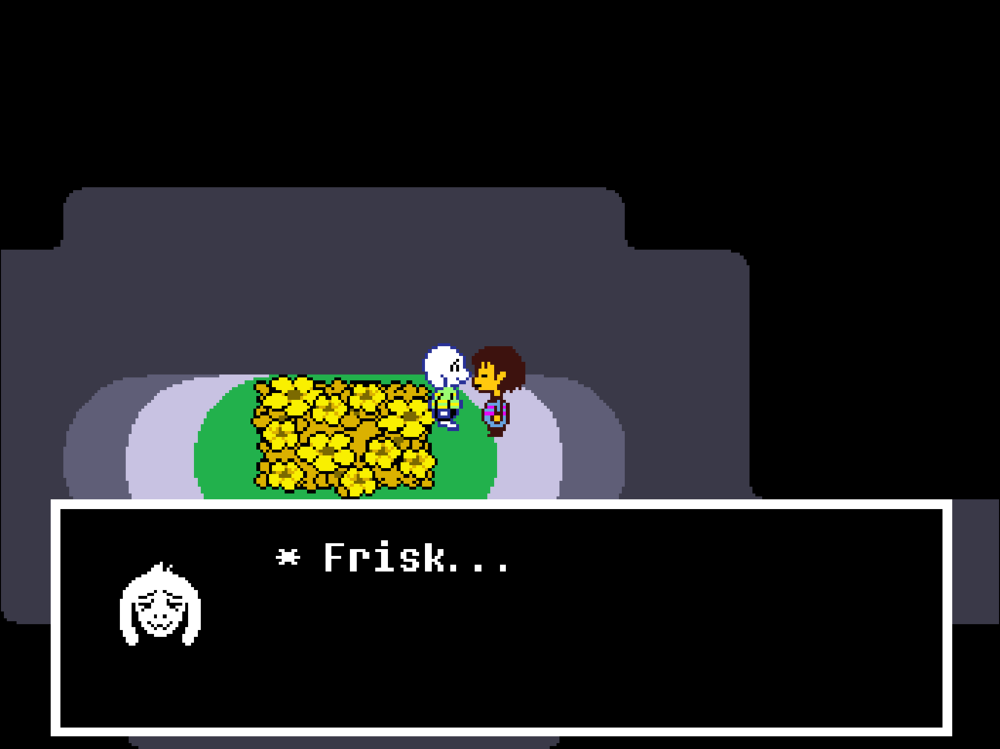 After saving the souls of every one including Asriel, if you walk all the way back to the beginning of the game you can comfort Asriel before he becomes Flowey again. You can also talk to all the NPCs and hear their thoughts on begin free from the Underground. You then leave for the surface with all your friends and can decide if you want to be the ambassadors between monsters and humans, as well as if you want to stay living with Toriel or return to the life you had before. If you choose to stay with Toriel, after the credits you will see she delivers you butterscotch pie while you sleep. When you reopen the game, Flowey will state “there’s nothing left to worry about.” But you can reset everything but urges you not to as everyone will be trapped in the underground again. If you choose to replay, he asks you to wipe everyone’s memories including his and yours, then says goodbye calling them by the name given to the fallen human at the beginning of the game.

If you had completed the genocide route first, the ending will be completely different. All the pictures in the credits will be crossed out and Frisk will be replaced by a sprite of Chara, implying that all of them had been killed by Chara after you freed them. That is if you chose to go your own way. If you chose to stay then in the very last seen when Toriel leaves the pie, Frisk will turn in the bed to reveal Chara with red eyes and a low-pitched version of Flowey’s laugh. Implying there can be no more happy ending for any of the characters. 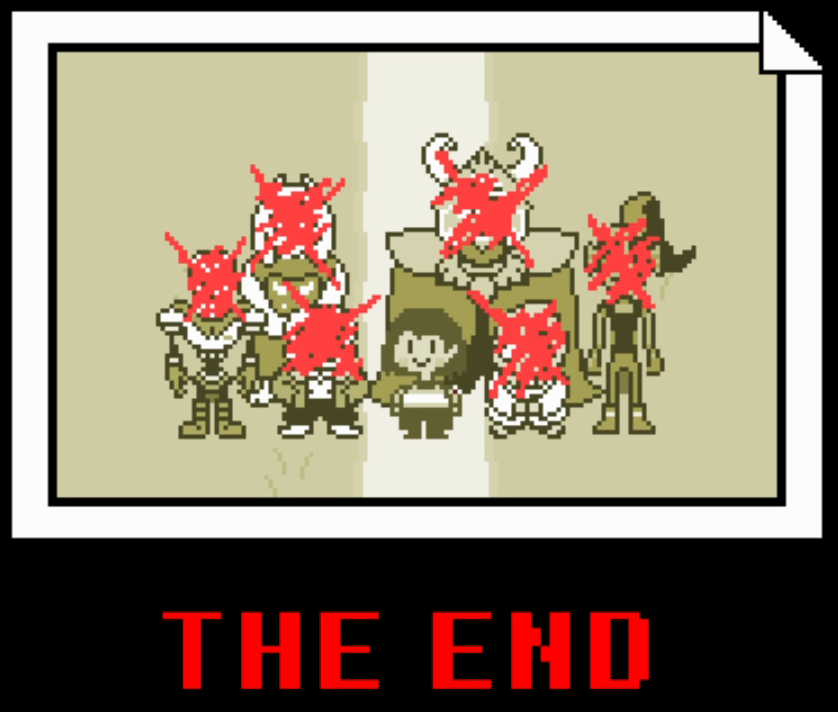 Genocide or No Mercy Route

To begin this route as Frisk you need to kill the first Froggit you encounter and attack the training dummy, then you will get a counter saying how many more you need to kill. Once you each the full amount, then every random encounter will occur but you will just be left with a message saying that nobody came. At this point the music of the game will change to be a distorted ambient track. Doing this you will gain EXP (Execution Points) and LVL (Level of Violence). Number of characters to kill per area:

Once you enter the Waterfalls in the genocide route instead of an exclamation point, you will get a smiley face. NPCs at this point are also no longer present as they are hiding from you. And puzzles are completed for you as well as in Snowdin. You will still encounter the Monster Kid but the character (basically the re-incarnation of Chara at this point) will climb roughly onto his shoulder to get onto the ledge. You will run into the Monster Kid again but Undyne will stop you from killing the kid taking the fatal blow and become Undyne the Undying, who is harder to beat then the regular Undyne. When defected Undyne just smiles and comments, “Alphys is evacuating the monsters ahead of Frisk and will tell Asgore to absorb the souls he’s collected.” You will also not encounter Alphys in Hotlands right away, instead you will meet Mettaton acknowledging you malice before fleeing. And all of Mettaton’s mini-show battles do not occur. You can also just bypass the Core as the elevator is fully functional.

The boss characters are fairly easy to defeat during the genocide route as most of them are not expecting you to fight back with the exceptions of Undyne, Asgore, Sans and Flowey (Asriel). Most only take a single blow before dying. Sans will also be an absolutely beast of a boss to get past/kill. This is the only main route where you will face Sans in battle, in the pacifist route you will simply pass him by as he congratulates you. In the genocide route; however, you have to face him and he is aware of all the times you reset the timeline back to your SAVE unlike all the other characters. If at any point you stop killing every character you encounter you will revert to the neutral route which has the pacifist story line but you will still have to face Sans. 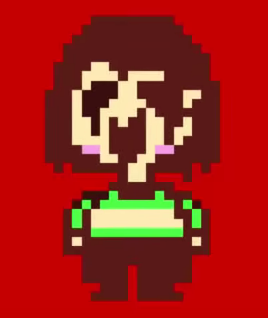 During this route Frisk slowly becomes inhabited by the soul of Chara. At New Home this becomes apparent when you are looking at the objects. Your character will acknowledge everything that belongs to them. Taking the knife gives you the remark “About Time,” the locket when equipped gives the remark “Right where it belongs,” and other items either leave the remark of mine or acknowledging they were there before. Meaning they have fully become Chara and have their memories. In this area instead of the monsters recounting the events that lead to Chara’s death, you have Flowey appearing recounting the events after they became a flower, learning they had the SAVE ability as well, and why Chara started killing. As well as the fact that Chara is the one who wanted to die by eating Buttercups and go to the human world to kill six more individuals, but Asriel still controlling part of his body refused to attack while Chara screamed mentally at Asriel to do so after Chara controlled carrying their own body to the human village. This is what ultimately lead to Asriel’s death and later is where he picks up the mentality of kill or be killed. He even acknowledges that the two will face off attempting to kill each other and realizes he will not win. You will then face off Sans and Asgore with Flowey landing the final blow. His face resembles Asriel and begs Chara not to kill him. Flowey will be killed by pressing any button. Instead of going back to the throne room, the screen stays black and the real Chara appears. Through Frisk’s actions in the genocide route, this allowed the real Chara to come back. You are given two options: Destroy the World or Do Not Destroy the World. As Chara hates everything and is basically a serial killer same as Frisk at this point. Choosing to Destroy the World, Chara will call you a good partner. If you choose not to, Chara will jumpscare you stating “SINCE WHEN WERE YOU THE ONE IN CONTROL?” Then the screen will shake and fill up with 9s as the world is ultimately destroyed.