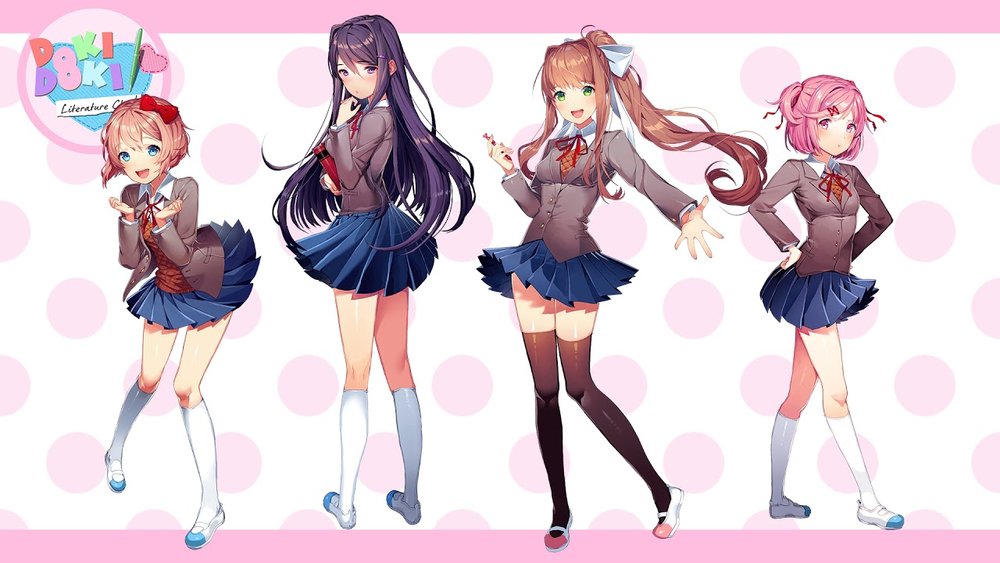 Doki Doki Literature Club is a visual novel that starts out as if you are playing a dating simulator. You play the protagnoist and you join your childhood friend Sayori to join their high school’s literature club where you meet Natsuki, Yuri, and Monika. You grow close to the girls through poetry and reading books, and the club begins preparation for the school’s festival to join more members. Here is where the game takes a turn.

If you are triggered at all by depression or suicide, do not go near this game as it will not be good for your mental health. You have been warned.

What Does Doki Doki Mean?

It’s a mimick word, meaning it’s made after the sound of a heart beating at a quickened pace. It is used to refer to moments when attractive people of [insert sexual preference] stand very close to you, moments of nervousness, stage fright, excitement, near misses, etc.

This will contain major spoilers! If you want to play the game, play that first then come back to read this. The game is free on Steam and I highly recommend it.

Sayori admits to suffering with depression and her daily poem takes a sharp turn from bittersweet to dark and morbid, with a plea for someone to get out of her head. Which echoes with me personally, as I have Bipolar Disorder and in high school I once went to my sister sobbing the very same phrase over and over again. And then following the club, you discover she’s committed suicide. Then the game glitches and starts over from the beginning, only Sayori is not present. Any remnants of her presence causes the game to glitch. And all dialog gets darker and more glitches. Yuri begins cutting herself and the game will only accept interactions that favor Monika. Then Yuri kills herself and Monika apologizes to the player before deleting the character files of Yuri and Natsuki. At this point, the only character remaining is Monika who is aware she’s trapped in a game and she can manipulate the game files from alter character’s personalities or erasing them altogether. Afterwards, she admits she’s in love with the player of the game not the protagonist. And this will repeat forever until you delete the character file of Monika causing the game to glitch once more and Monika panics but she accepts this so you could be “happy” and allows the game to restart from the beginning with her absent. Sayori explains that they are now the president of the club, and they know everything about the game and what the player did. Causing Monika to return then audibly speak to the player (the only spoken dialog in the game). Then the game ends because “there is no happiness” in the club anymore. But you can go back into previous saves or began a new playthrough without witnessing Sayori’s suicide where you’ll be thanked for trying to help all the girls. 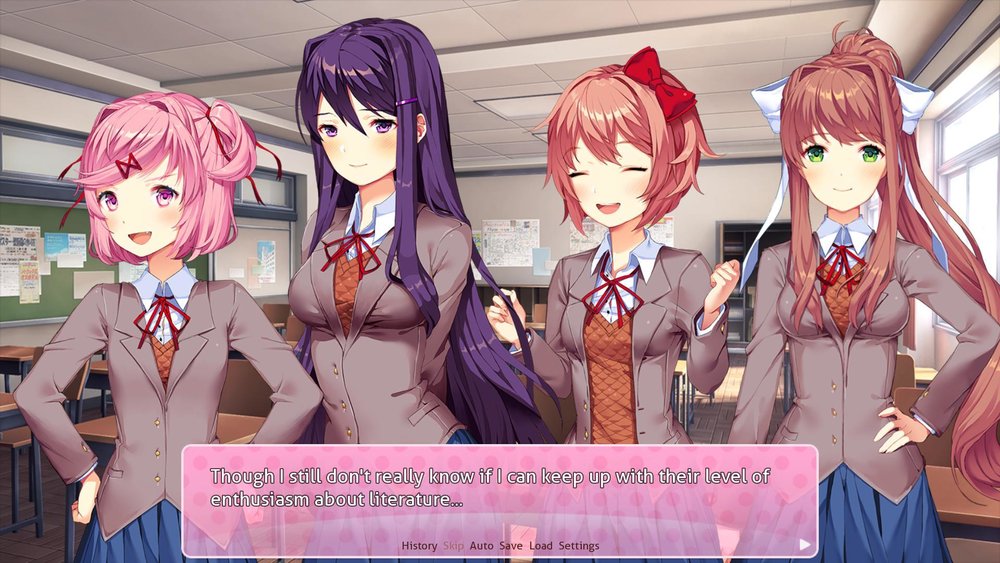 Who are the girls?

Sayori is your childhood friend and neighbor. She has a bright and vibrant personality. She loves food and is a romantic option for the protagonist but this will not work out due to her suicide brought on by depression and possibly even more driven by Monika. 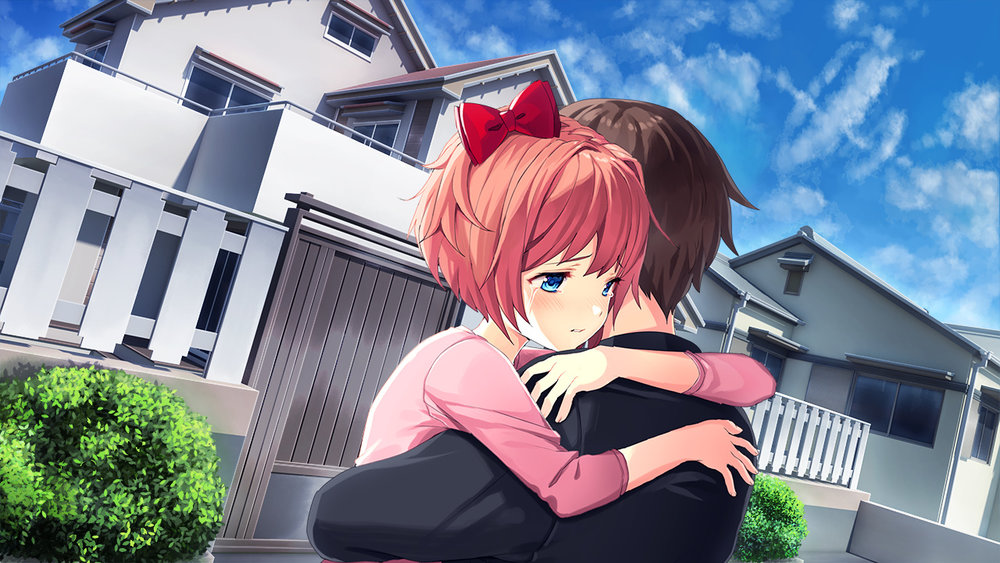 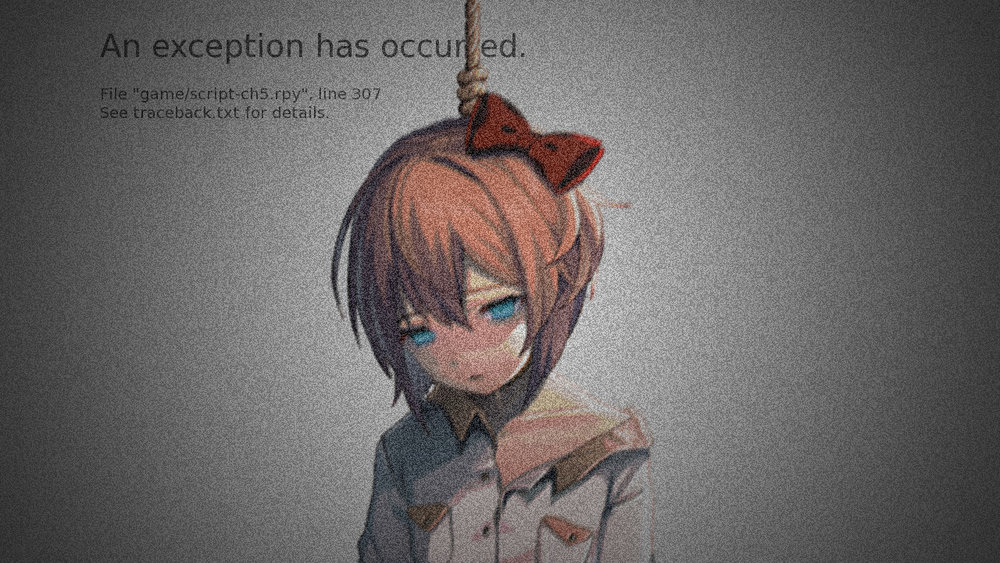 Natsuki is the preppy and youngest member of the literature club. She can come off as sour and fiesty, but there’s more to her character if you dig into it. Her favorite is abusive and neglectful, she is a closeted geek, and loves attention that Monika exaggerates. She’s also the only one who doesn’t have a mental breakdown. Natsuki is also makes really good cupcakes. 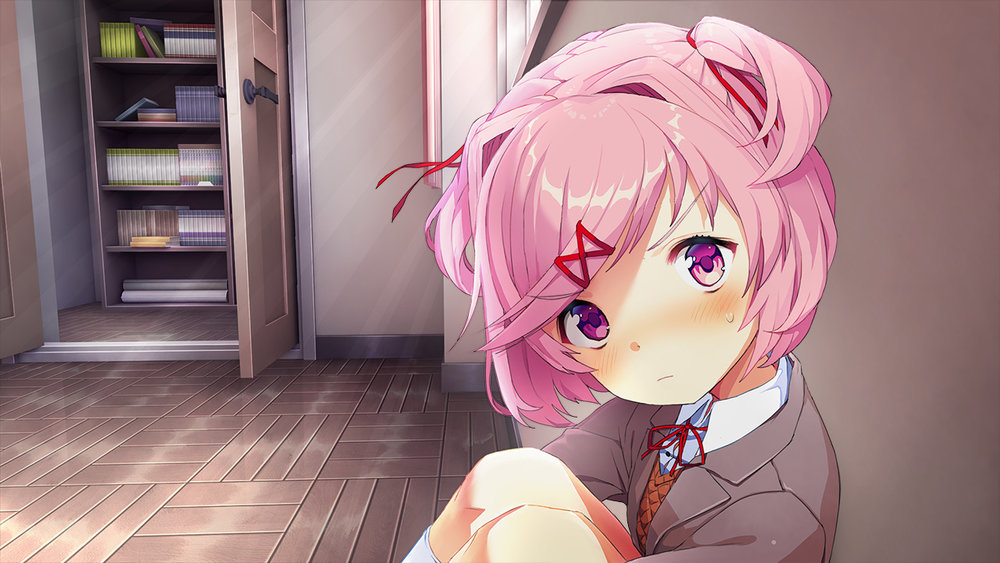 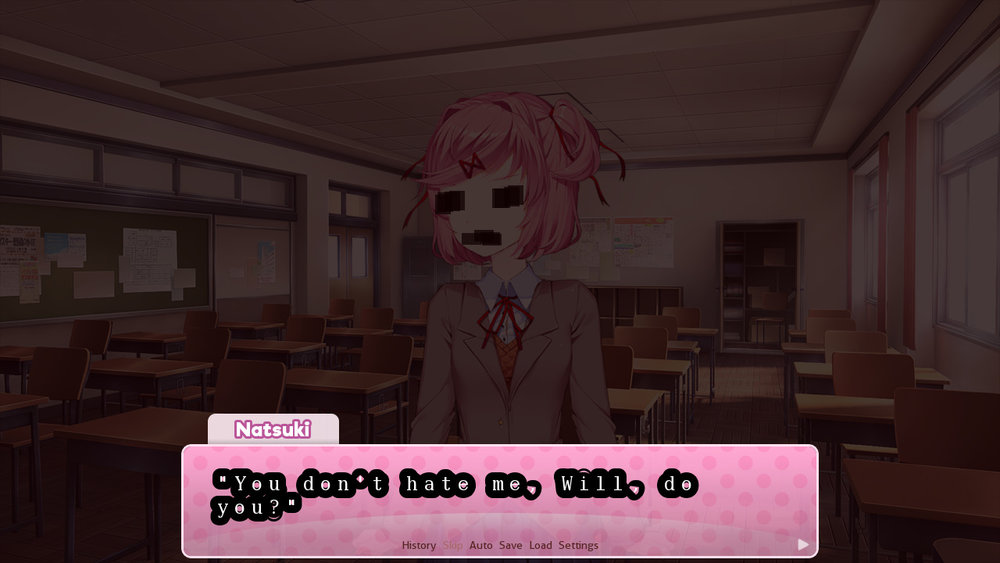 Yuri is timid/shy but speaks up about things she’s really passionate about. She loves fantasy, horror novels, and collects knives. She self-harms out of a bizarre sexual fetish though this is exaggerated by Monika who is trying to paint her in a bad light. Which drives Yuri to never want to leave the protagonist alone and kill herself even if you accept her confession. 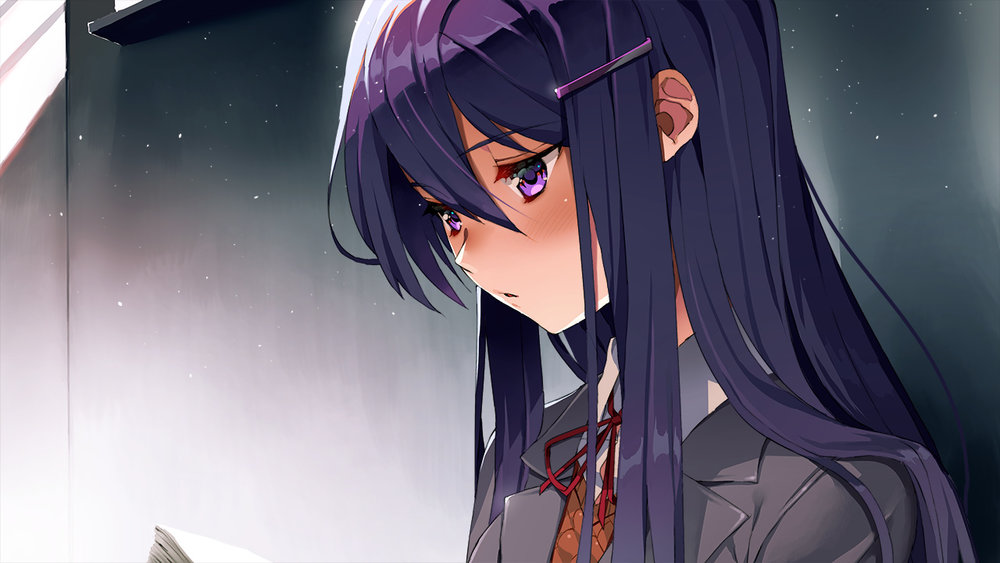 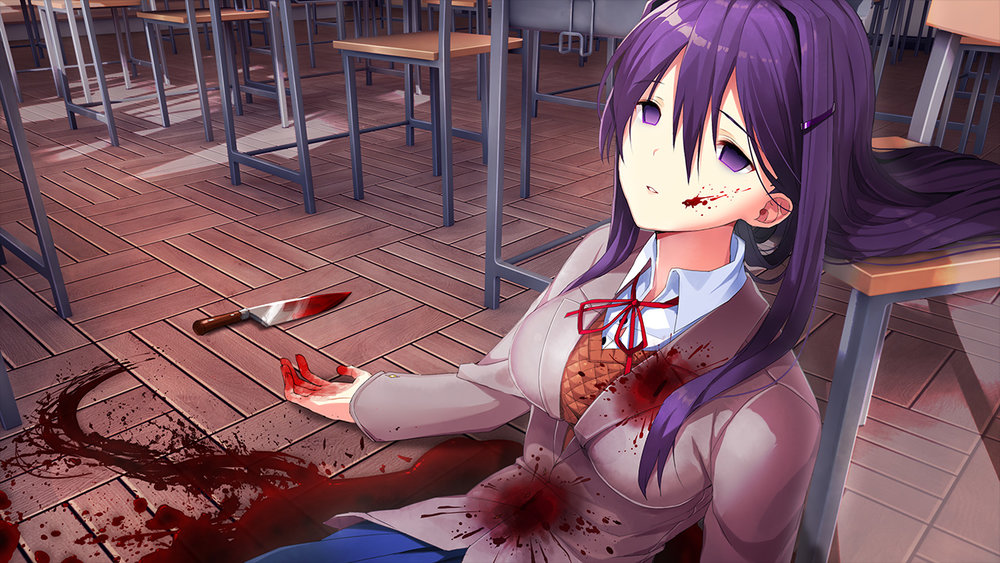 Monika is the leader/president of the literature club. She comes off as sweet, friendly, and mature. Her name is also the only name that is not explicitly Japanese. She also is obsessed with the player and will manipulate the characters to go “crazy” so the player can’t have the protagonist get with them. She’s also the only character to have black socks rather than white ones. 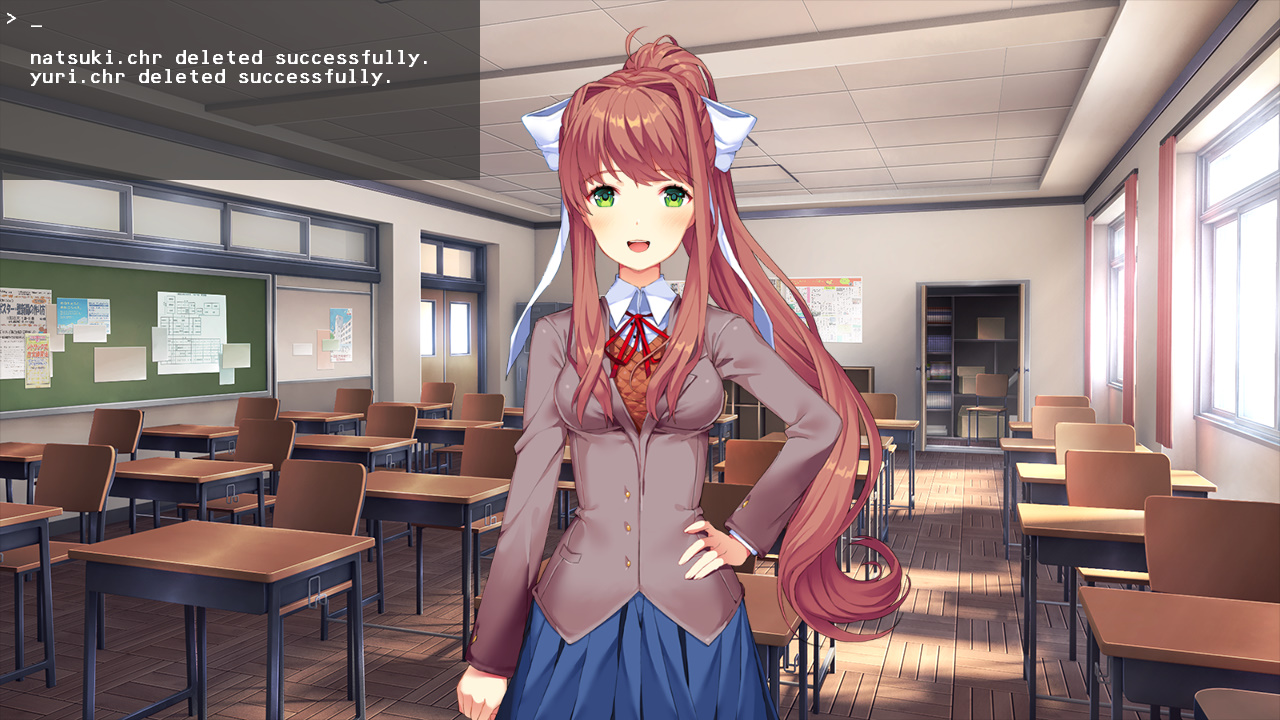 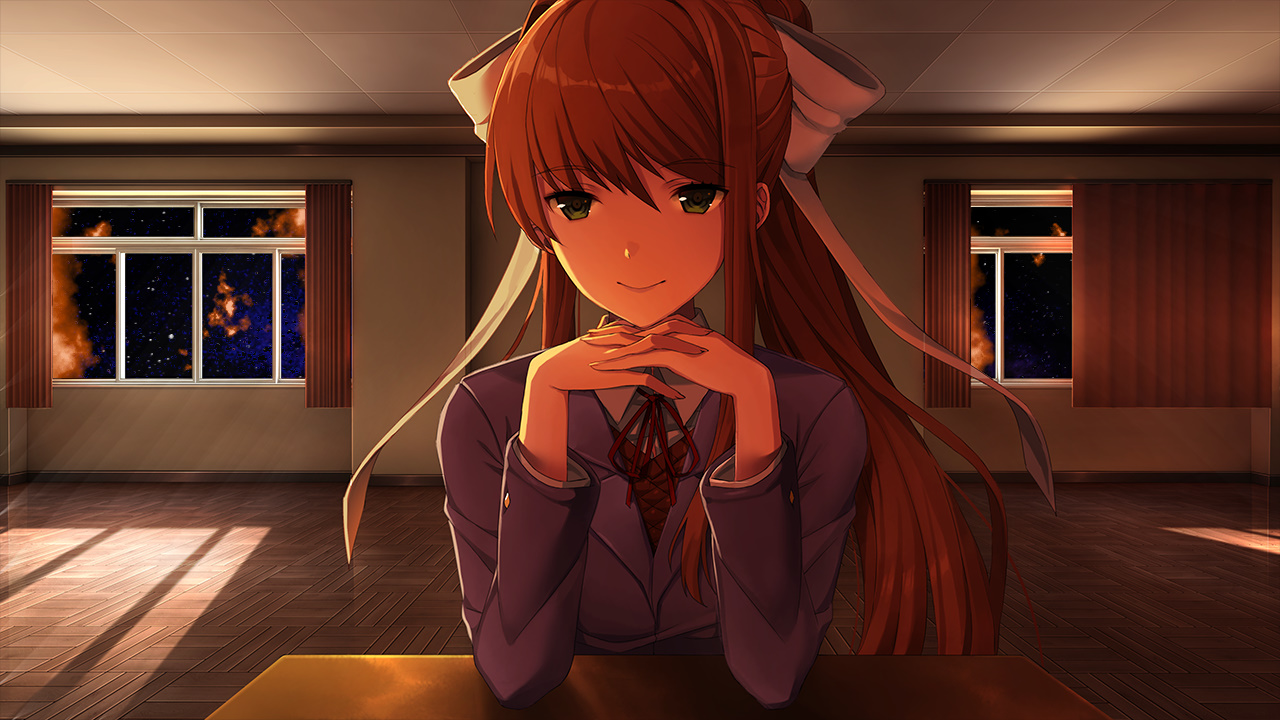 I enjoyed this game a lot granted it is really dark. And I love how they twisted the typically “dating simulator” into something else. With the player having to pay attention to the game files, which you can see Monika updating every now and then that changes how Sayori, Yuri, and Naksuki interact with the protagnoist. As well just special messages to the player prior to the glitches. Like one that says “Have a good weekend” followed by you seemingly being stuck on one scene for quite some time. I did play through the game three times, each time favoring a different girl so I could see all of the story. On the third time (really fourth since I played it normally once then kept restarting the game prior to the first suicide) I let it play out and in the end I was gifted with a note from the developer Dan Salvato for taking the time to see everything about Doki Doki Literature Club. Plus it just felt really good to do that over as Monika doesn’t try to come back and delete the club. You get all the characters being happy for once, and it just feels really good. Overall, I really enjoyed plus the game is free on Steam if you wanted to check it out for yourself. If you’ve played this game, what did you think of it?