It’s been quite a few weeks since I received the ColourPop Supernova shadows and I have been trying to add them into every look I’ve done since then to form a complete opinion on them.  I initially avoided them when they were first launched as it didn’t seem like something I would be interested in since I had already gotten the Stila Magnificent Metals Glitter & Glow Liquid Eyeshadows… but I am allergic to it or something as my eyes just itch like crazy when I wear them. So I thought I would try these to see if the same thing would happen.

I do not have all of the shadows at the moment as the newest ones released were out of stock but I will be getting them when they come back in stock. So the shadows I did manage to get my hands on were: Firecracker, Dragon, Hard to Empress, Moon Lit, Mothership, UF-Woah, Running in Orbits, and Walk of Fame. I still want to get: Over Again, From the Valley, Prelude, Lucky Penny, and Now or Never. Some of these shadows I would honestly would’ve switched their names around if I was ColourPop. Such as Dragon is not the green shade and Lucky Penny is not a copper tone. It just seems so silly, but again it was not my call. I do like the shades are pretty regardless.

ColourPop’s Claim on the Supernova Shadows

These high-impact ultra-glittery shadows have a metallic base, are extremely long-wearing, and can be used as a base, alone, or as a topper.

And I have tried it in every version: base, alone, and topper. I found the best results when I wore them as a base or topper. And the absolute worst when wearing them alone as I found they flaked away and creased throughout the day when worn this way. 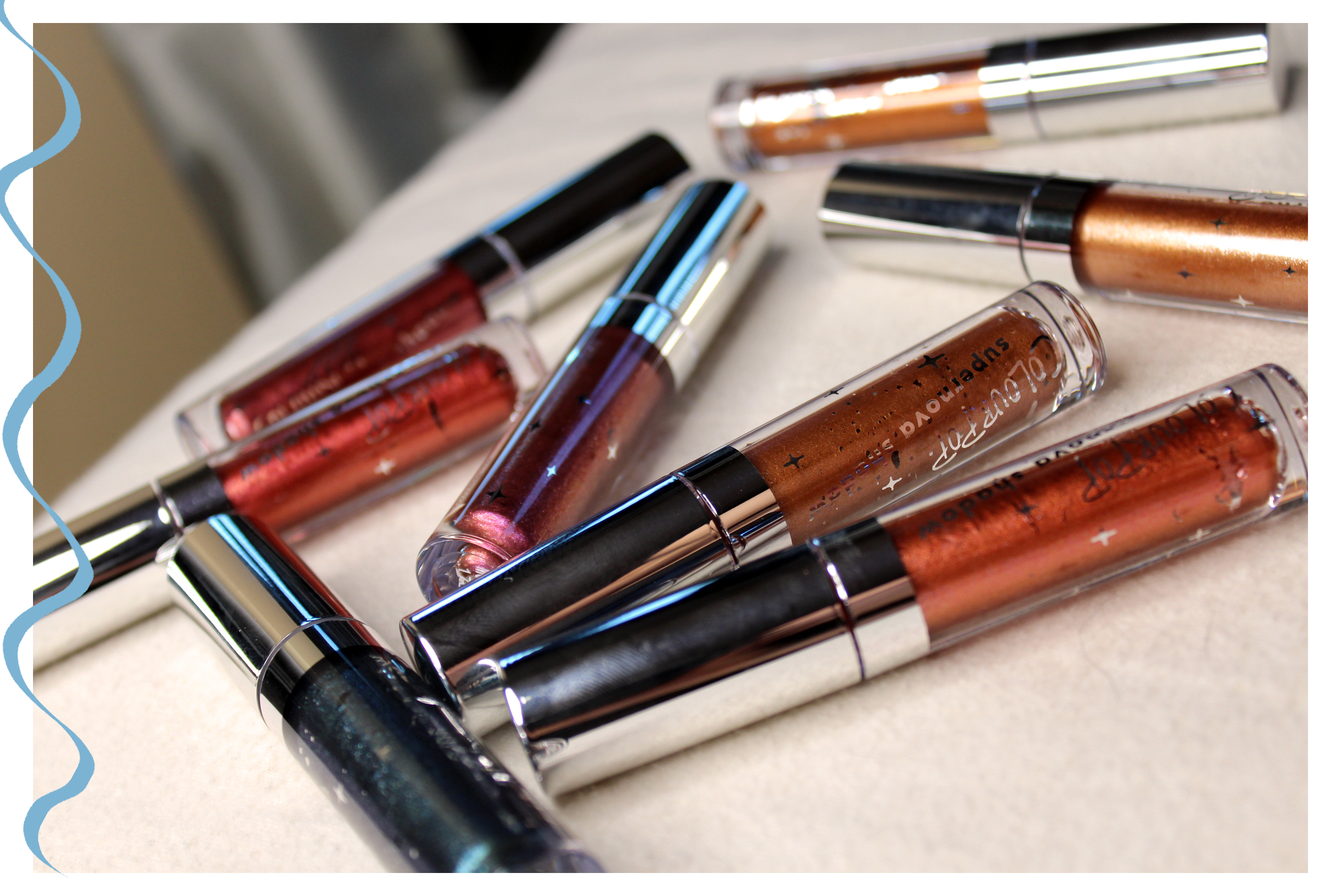 This includes all of the shadows that have come out though I don’t have them all yet:

Typically I don’t do arm swatches as they aren’t accurate do to the nature of the product, but in this instance that is exactly how they’ll look since you apply them directly to your lids with literally no blending. You might put other shadows over top of them, but that doesn’t change the overall look of the shadow. Hence arm swatches of all of the shadows that I do have.

For this I used the shade Twilight from the My Little Pony Palette as a base for Mothership and Skydancer from My Little Pony Palette as a base for Moonlit. As for all of the others, I used the shade Bitter Better from the I Think I Love You Palette as a base for the rest of the shadows. Was it the best match? No, but this is more just to show how they sit on top of other shadows. The shadows in order over the shadow Bitter Better were: Running in Orbits, UF-Woah, Hard to Empress, Walk of Fame, Firecracker, and Dragon. Walk of Fame and Mothership don’t sit the best on top of other shadows but the rest work beautifully. If I were to do this on the lids, I would probably do the pairings from the Supernova Shadows as Base section as they match up the best with the shadows.

In this grouping, I just swatched all of the shadows on their own. Some of them like Mothership, Moonlit, and Dragon are a little streaky when used on their own. But if you use these with other shadows this is easy to blend out and hide. Swatches in order: Mothership, Moonlit, Dragon, Firecracker, Walk of Fame, UF-Woah, Hard to Empress, and Running in Orbits. Though they might look fine on their own, I do find they crease and flake off if they aren’t set or have a shadow underneath. If you do either of those, then I didn’t see that issue. 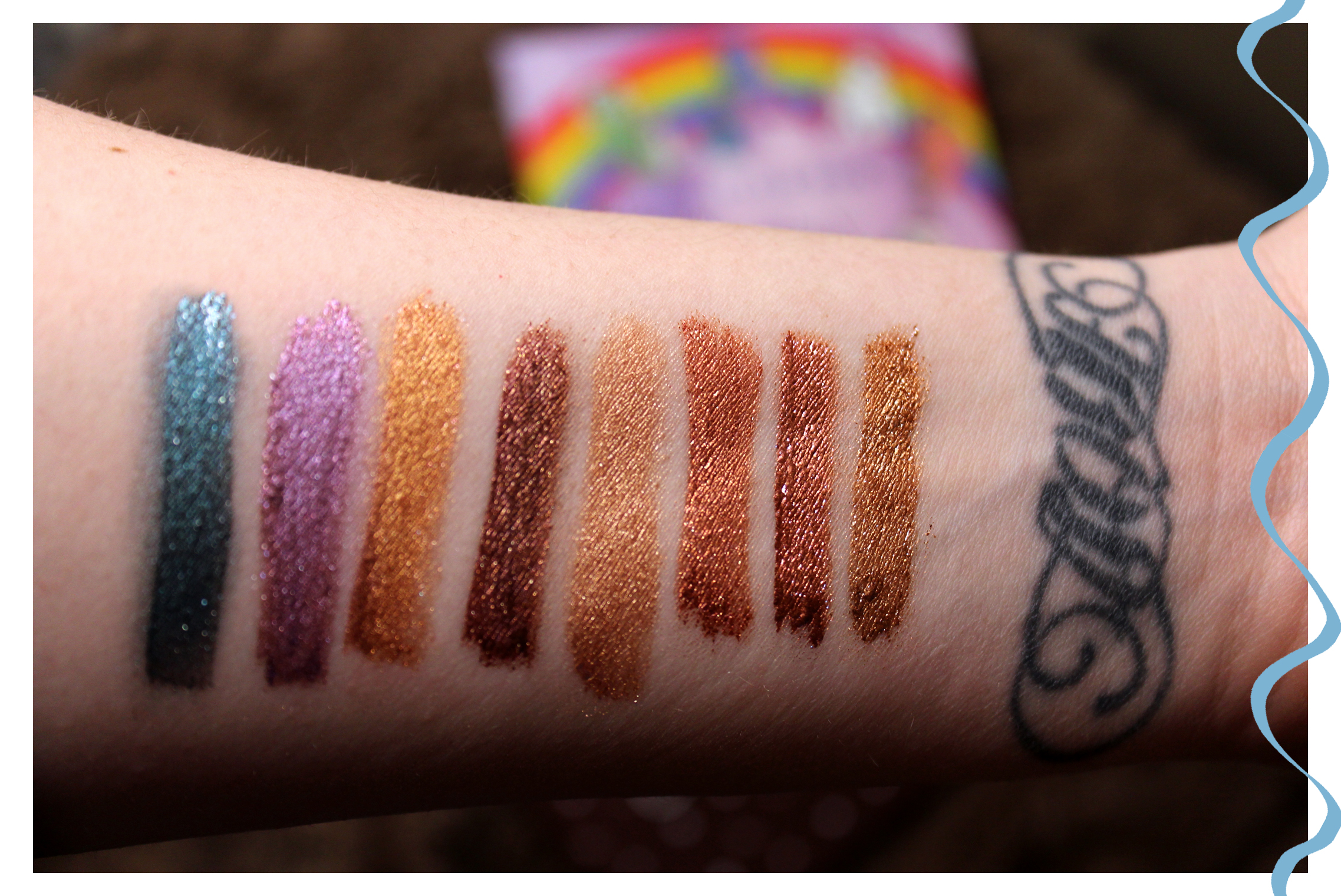 Supernova Shadows as a Base

I seriously love these Supernova Shadows especially when used as a base. I think they really bring out the pressed eyeshadows, even though the shades are wonderful on their own. The Supernova Shadows just bring another level to them and give them that perfect pop. I have been using these shadows every weekend when I do my more full glam look and I have already put in an order for three of the shades I don’t have. Two were still out of stock but if they ever come back they will be quickly be coming my way as I can honestly see myself using these all of the time. If you’ve tried these shadows before, what did you think of them? If not, what’s your opinion on liquid or cream eyeshadows?